I was up before dawn. It had been a while since I’d done such a long ride, and it had been about a year since I’d ridden my aluminum Cannondale, with its relatively aggressive frame geometry. Result: I was sore this morning.

I watched the local news on the Champaign TV stations while I waited for the sun to come up, then walked to the motel office to return my key to the large, jocular man who owns the place, then left town on the busy, rain-slick main road, which I immediately abandoned for the sidewalk until I crossed the Kaskaskia River. 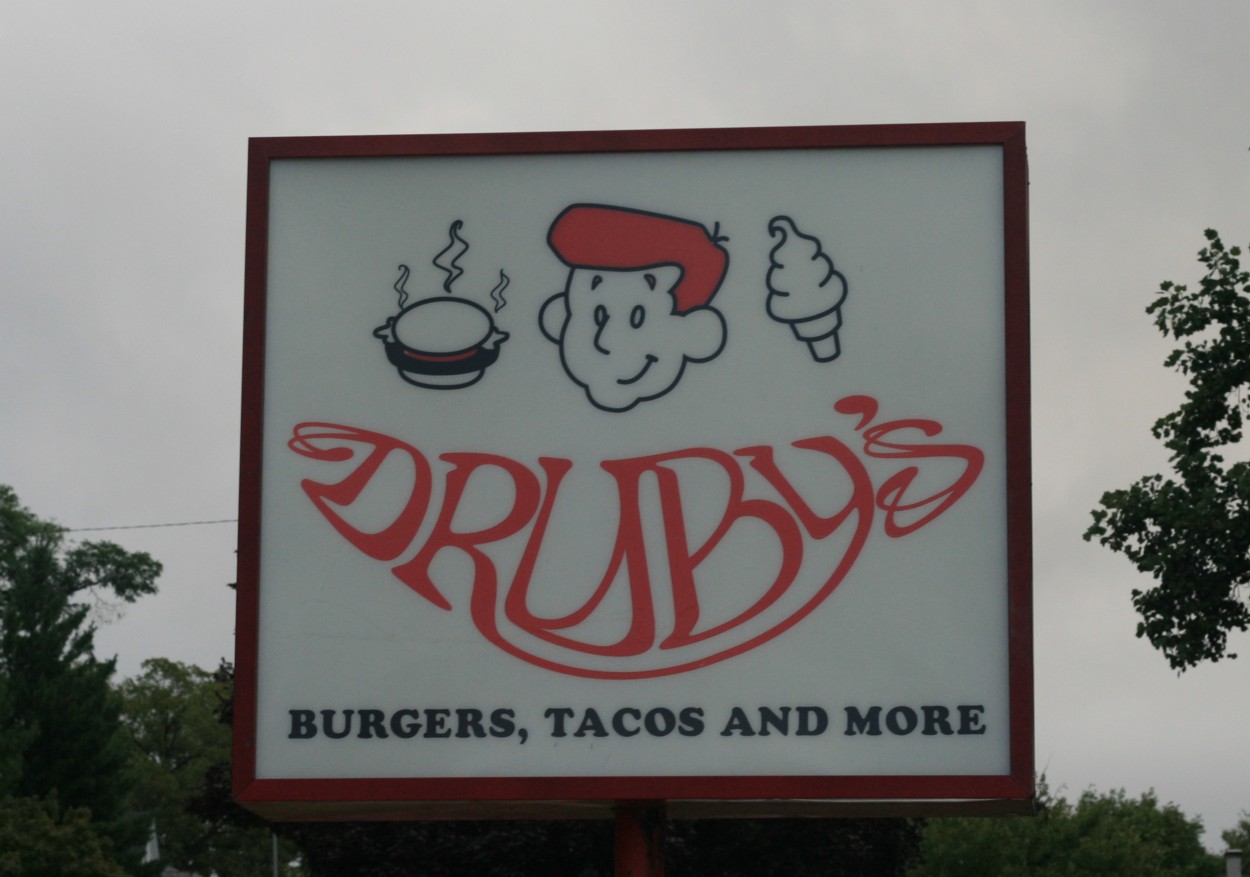 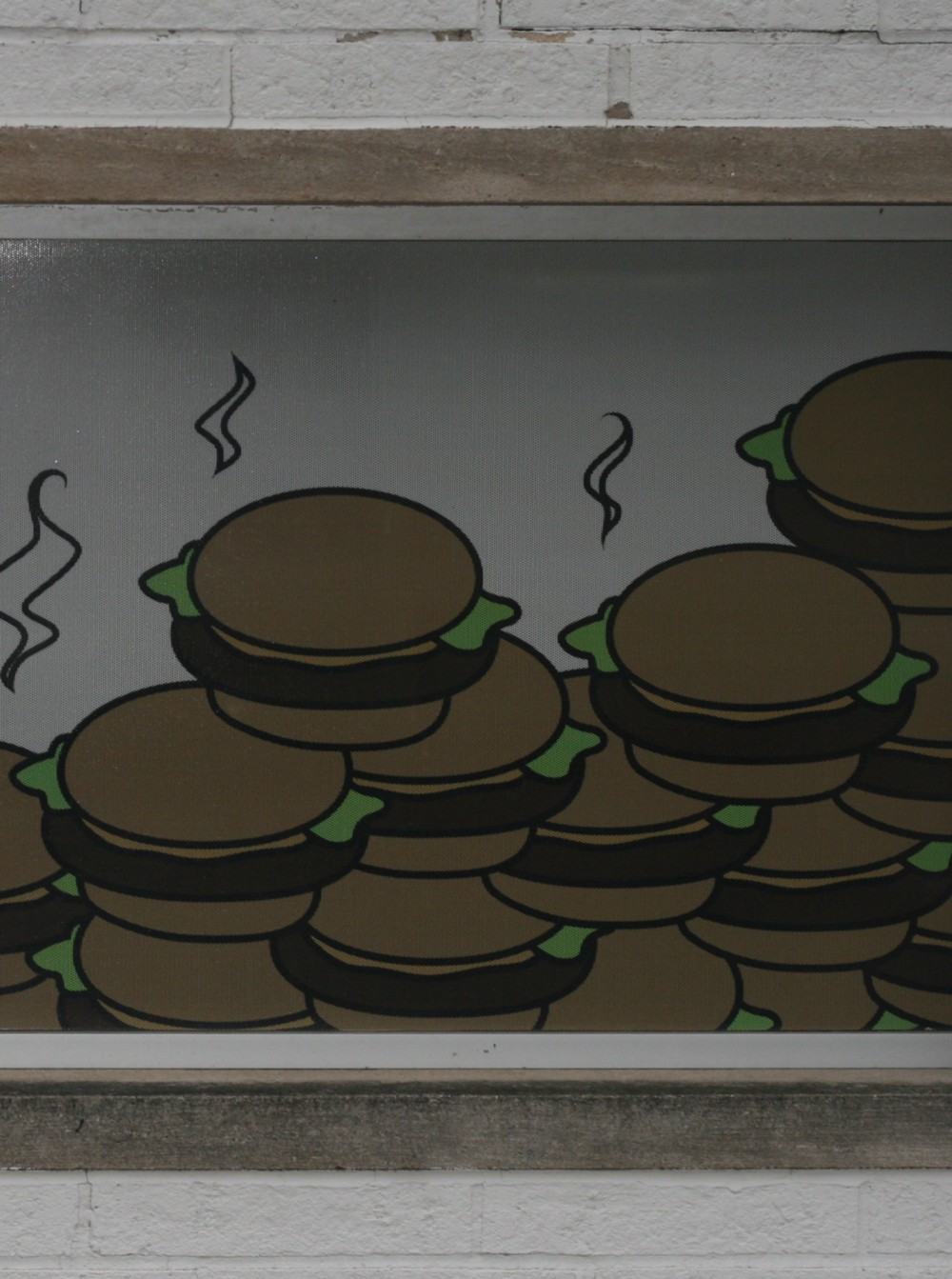 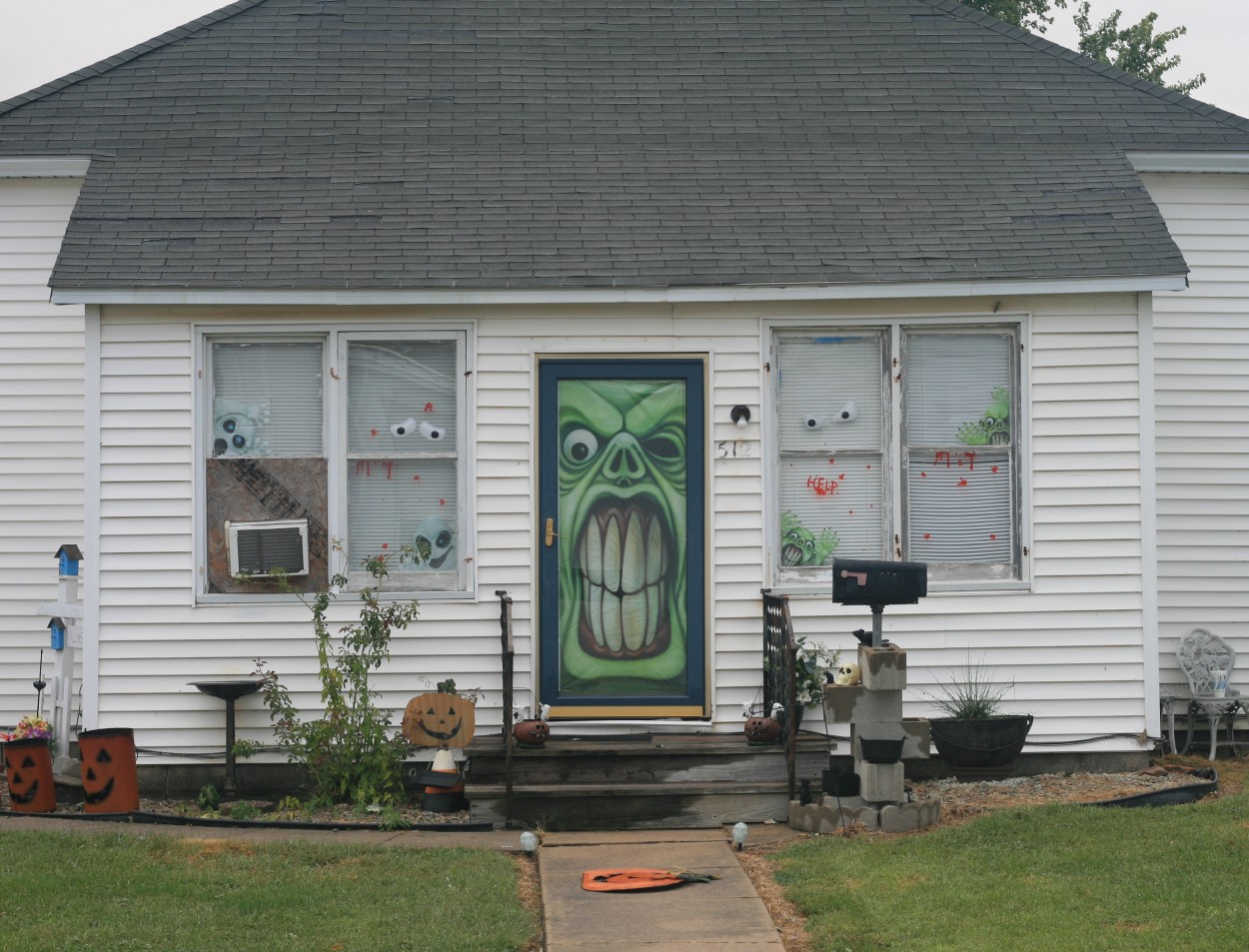 After a couple of miles I turned off the state highway and onto the first of the many county roads of the day. The sky was so dark that I was sure I’d get drenched, but the expected precipitation never happened, and the fenders on the Cannondale prevented me from getting wet from riding through the puddles from last night’s rain. I love those fenders, even though they are deeply uncool. 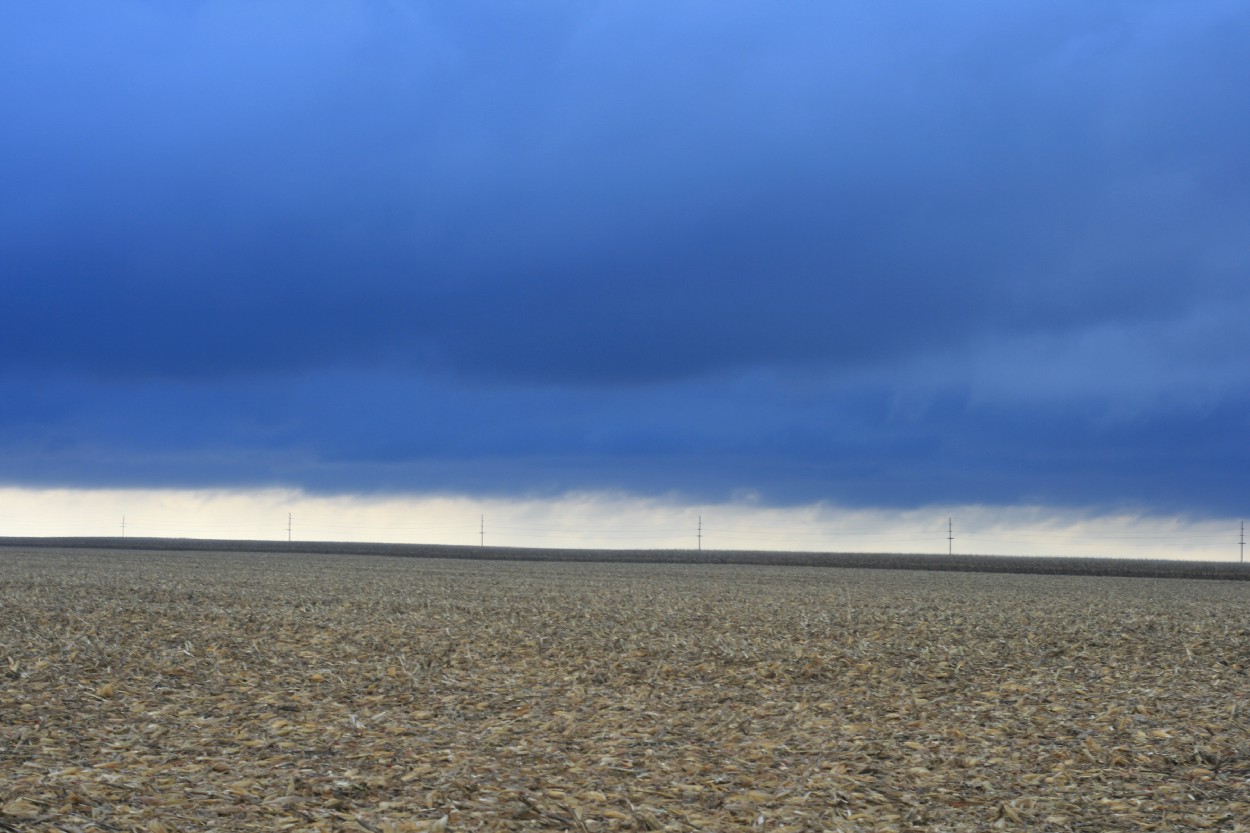 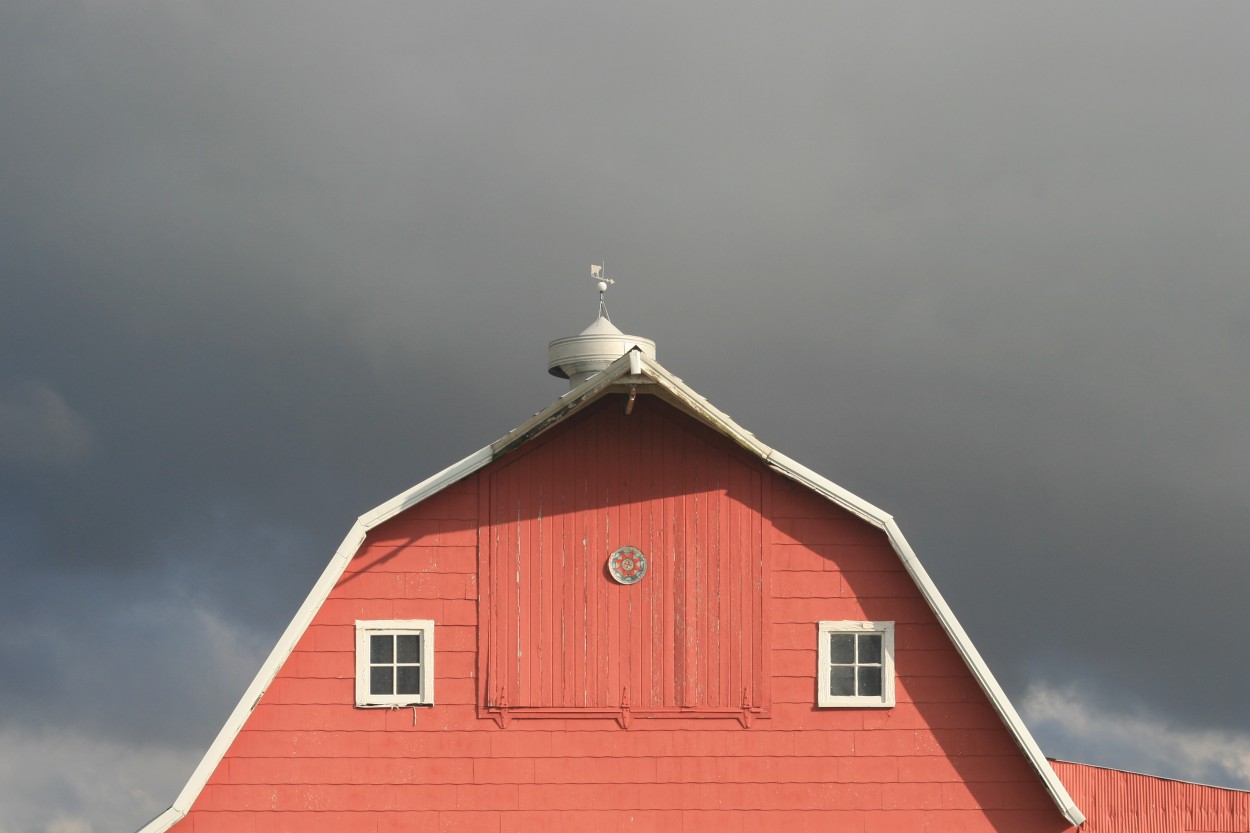 Not longer after I saw the tour’s very first Hillary sign (not counting the “Fuck Hillary” graffiti I’d seen sprayed on the roads a few times in this heavy Trump-favoring area), some dogs came out of a farmhouse yard, and I sprayed one with my pepper spray. I should probably be saving that stuff for the more aggressive dogs I anticipate in Ohio and Kentucky. I stopped in the small community of Windsor, where not much was happening, and then, after riding north for a while, turned right for a really nice, low-traffic section going straight east, during which time the sun came out for the rest of the day.

Mattoon (population 18,555) was one of the more prosperous-looking downstate Illinois towns I’ve seen. I was overwhelmed by the aroma of delicious baked goods as I rode into town, but unfortunately was never able to discover the source.

I spent some time in Mattoon looking around and taking photos, then rode onto the Lincoln Prairie Grass Trail for the twelve miles to the next town, Charleston (population 21,838.) The Lincoln Prairie Grass Trail is a mostly unpaved path along an old railroad right-of-way between Mattoon and Charleston. The trail was nothing special in terms of scenery (unless you enjoy the view of electric pylons), but I was glad the trail was there. 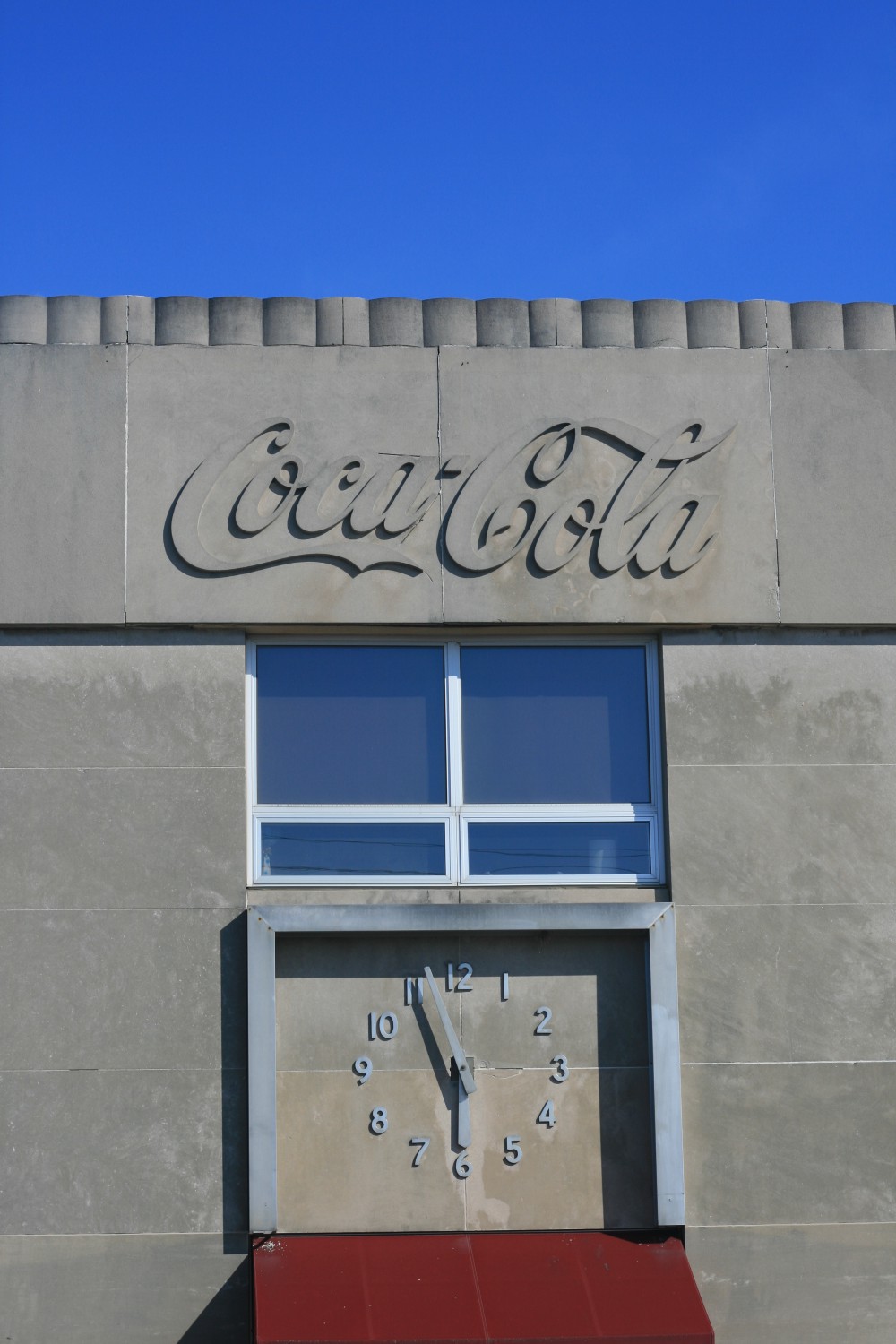 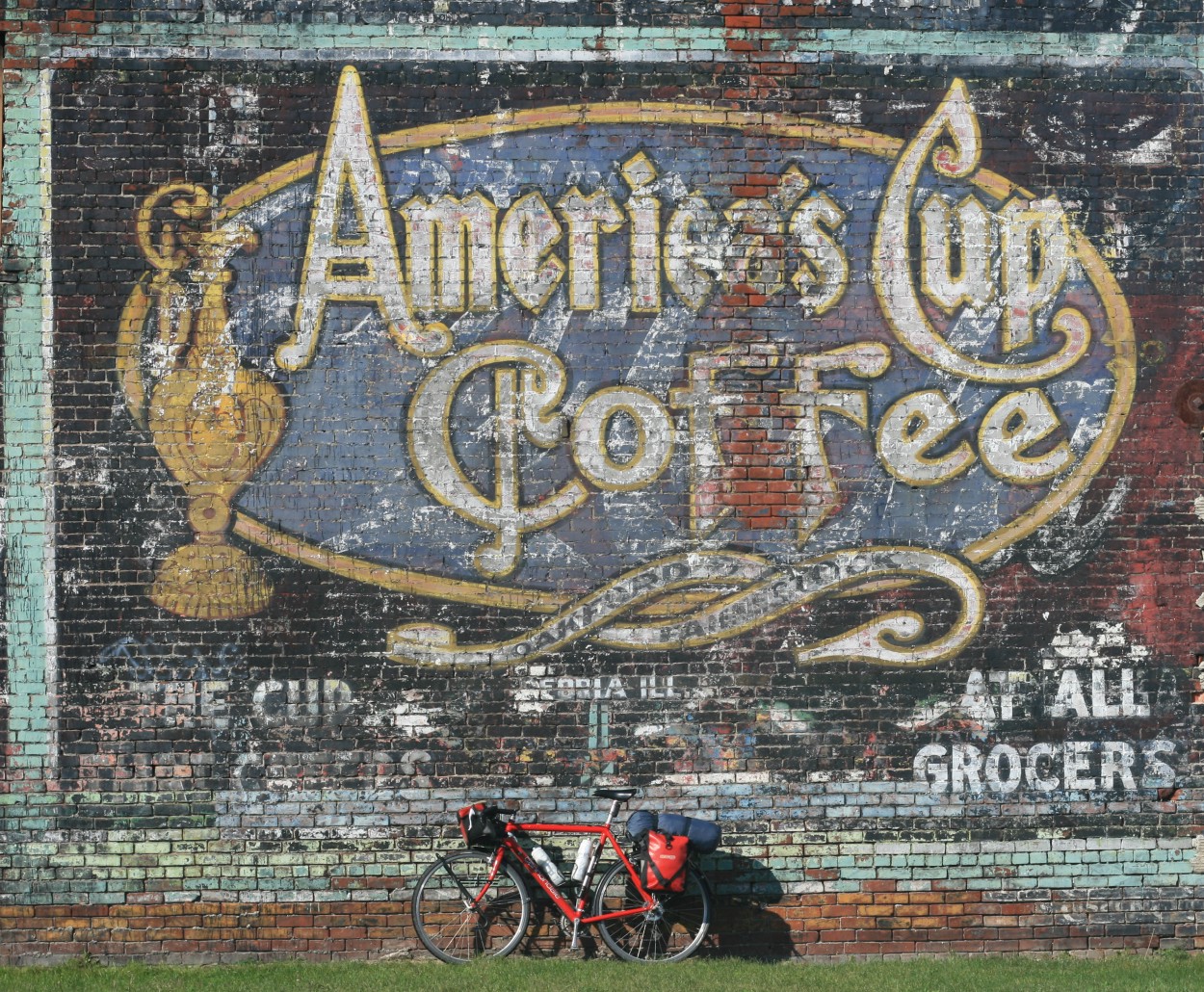 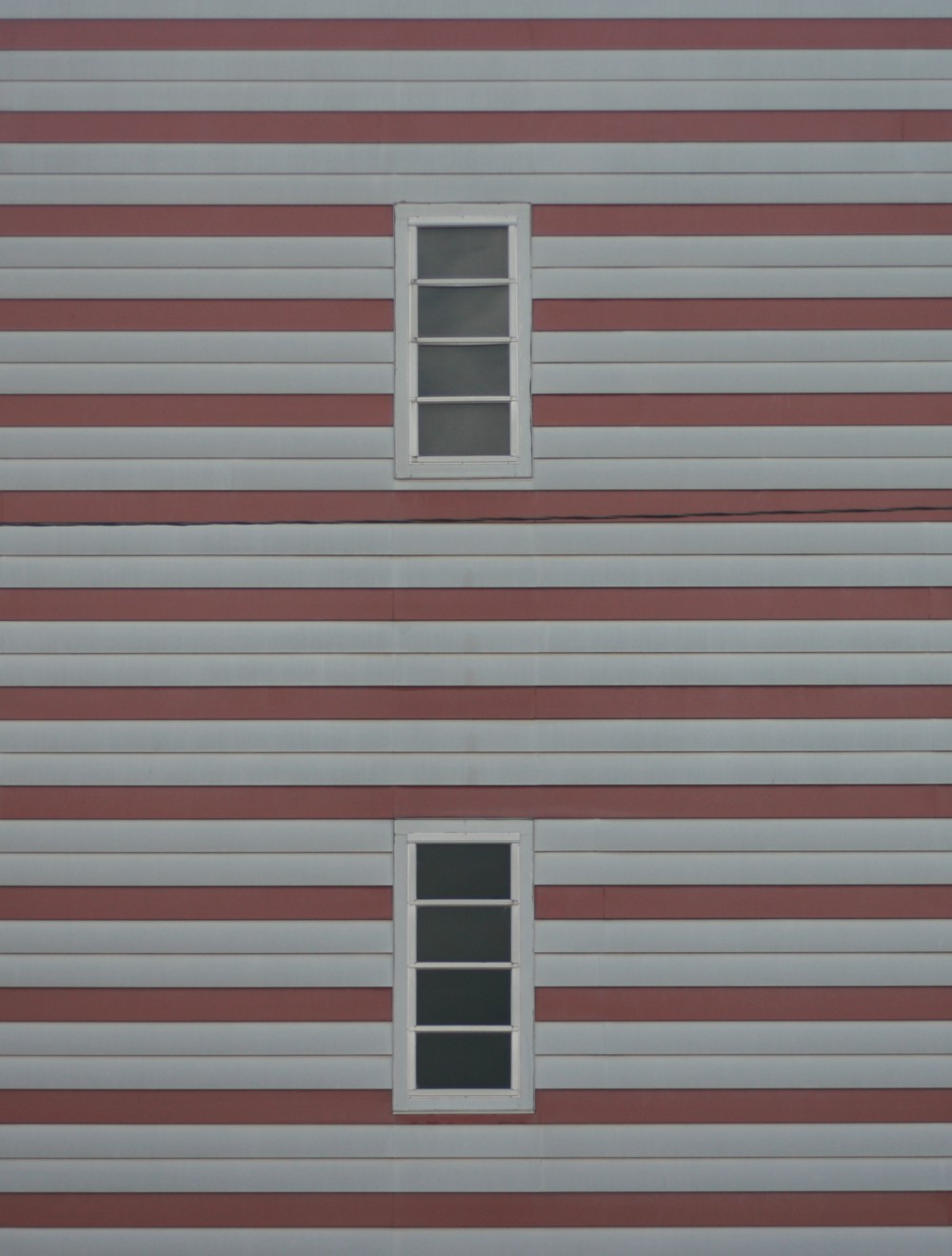 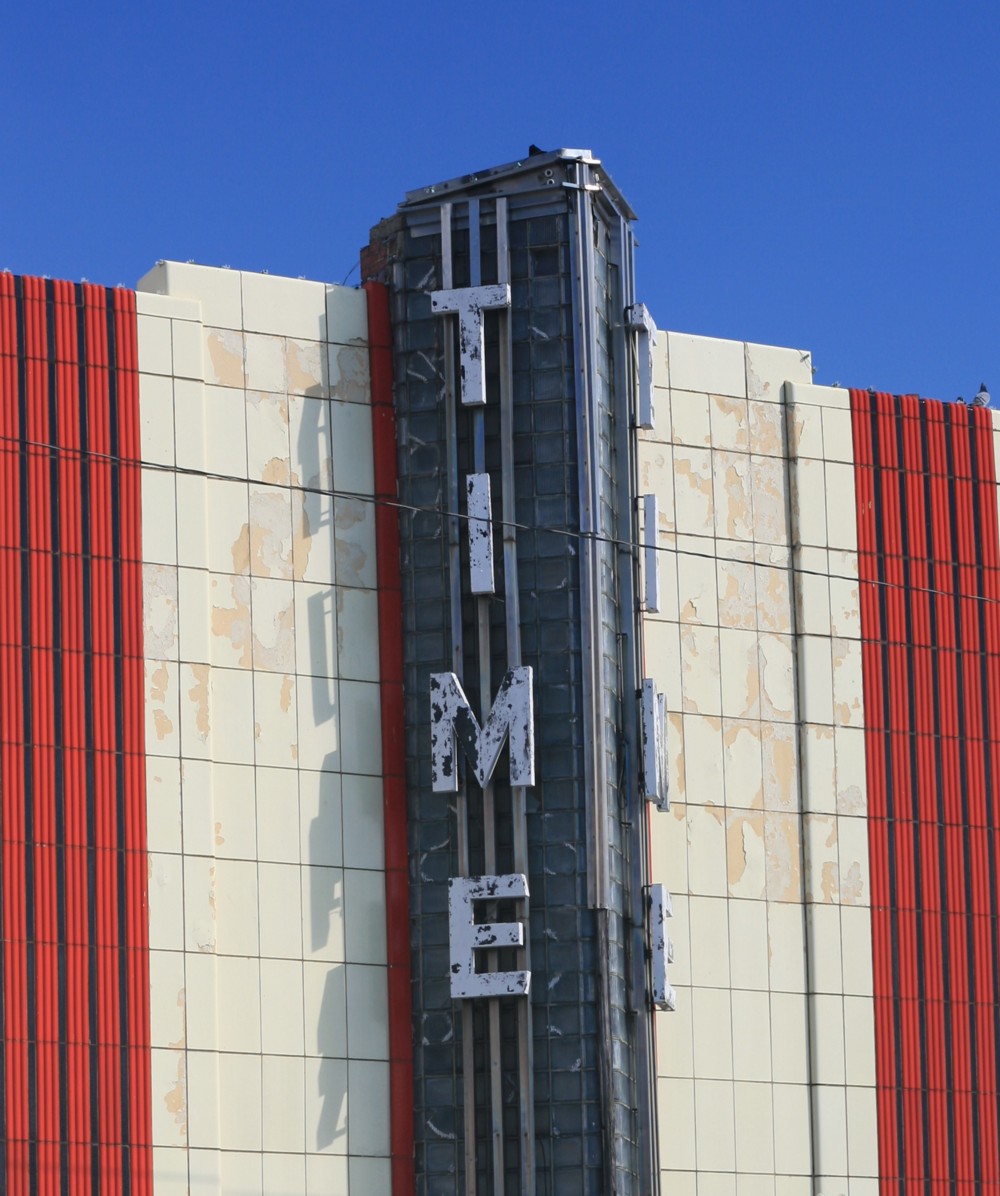 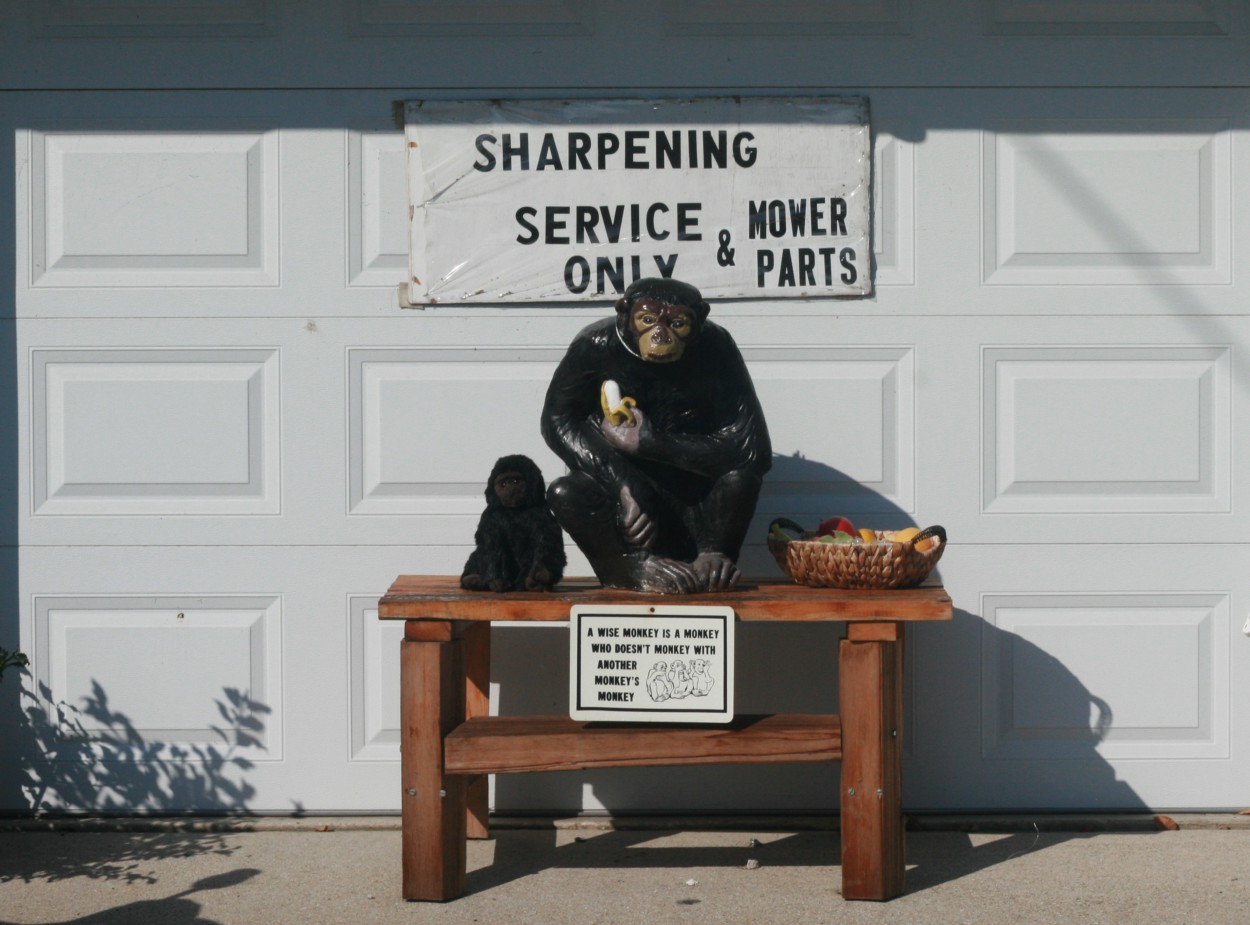 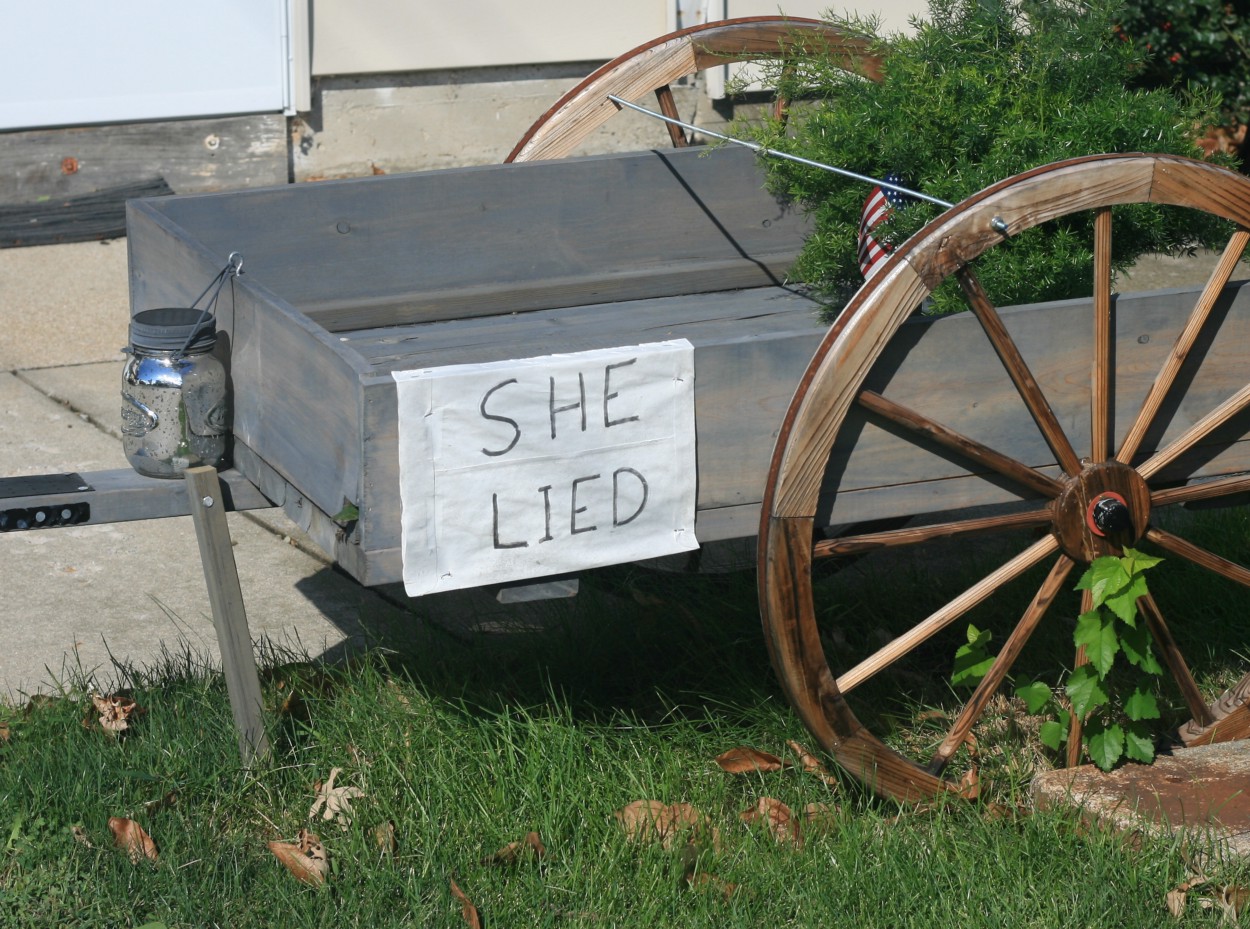 The trail led me into Charleston past some old factories, which I always find interesting, so I investigated the area for a while, then rode out of town on a county road. My noisy chain had been annoying me, so just out of town I pulled off the road into the gravel parking lot of “Bubba’s Garage”, where I applied some chain lube, checked my maps, and then walked over to the garage office, in search of soft drinks for sale. 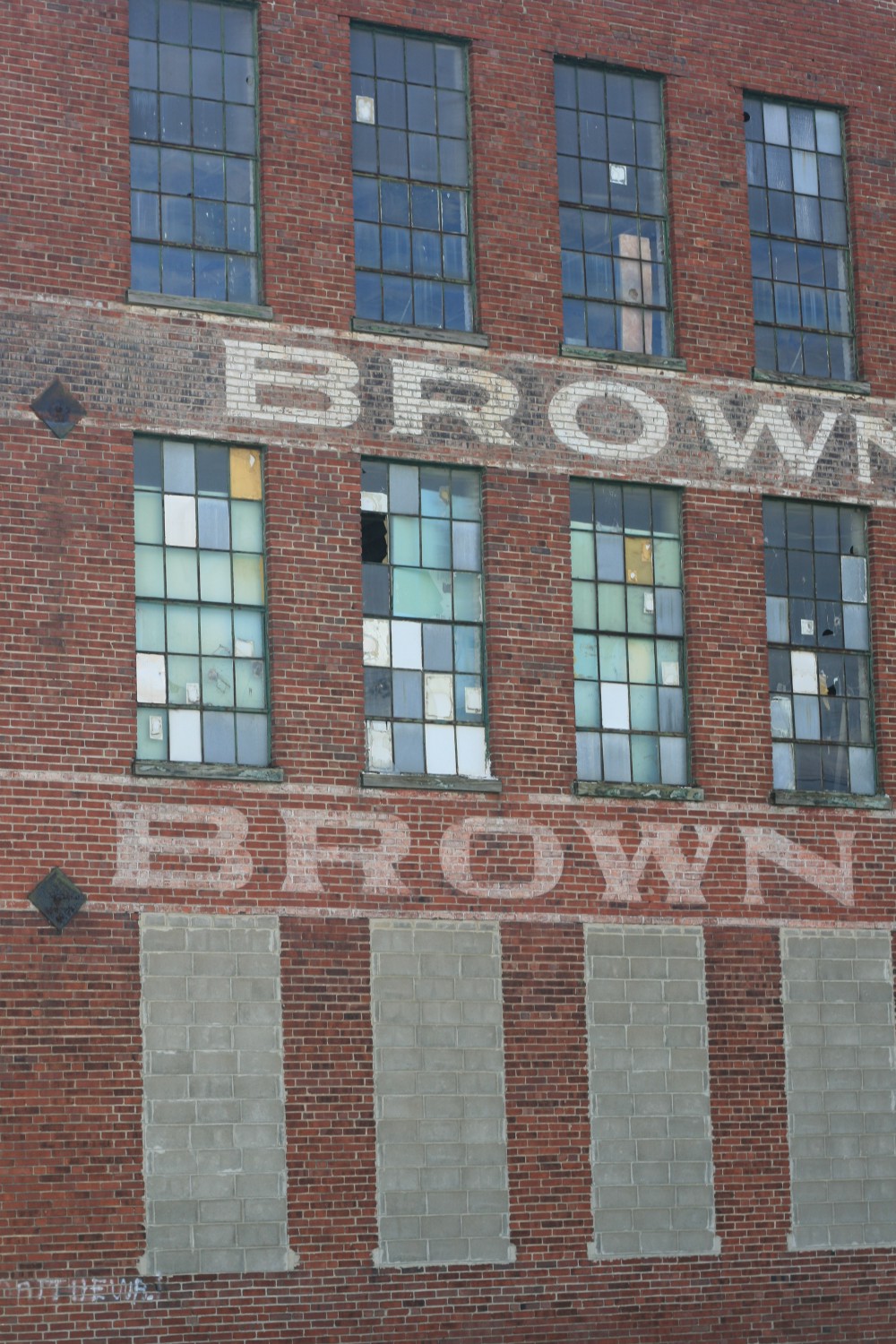 Bubba, a large, friendly man, sold me a couple of cans of pop from the office refrigerator, asked the Usual Questions about what I was doing, then told me that “I wish I had your energy.”

Bubba’s friend showed up and the three of us talked for a while. The friend said “I want to ask you a question.” After a meaningful pause, he asked “How do you sit on that little seat all day long?” Ironically, given that Bubba’s Garage specializes in tire repair, neither of the men asked me about how my bike tires have been holding up. That was odd.

I’d already spent too much time hanging around the garage, so, after declining the lunch invitation extended by Bubba and Friend, I hit the road. The next few hours were on flat country roads, where the only traffic I encountered was harvest-related. After about 25 miles I realized I was extremely hungry, so I rode off my route to Hindsboro (population 312) and stopped at a store called “Quick Gits.”

I’d originally planned to quickly “git” a few snacks there and get back on the road, but I ended up staying at the store longer than expected, mostly due to the availability of Hunt Brothers Pizza, fountain pop, a table at which to sit and eat, and some locals whose conversation I found amusing.

As I ate my pizza, I eavesdropped on the people at the table next to mine, as they discussed the questionable edibility of sushi, and “that new Japanese place” in Mattoon, a restaurant that I had in fact noticed when I’d been in Mattoon this morning. One guy had been there, and his review was positive, although another said “I might be able to eat their stuff, but I don’t think I could eat Korean food.” I briefly joined the conversation to tell them that I had eaten Korean food a few times, and found it very tasty, although extremely spicy.

I got back on the road, fortified by the Hunt Brothers and Grandma’s cookies. I was now way behind schedule, and it was clear I would not make to it my original destination, Kickapoo State Park, before dark. I decided to ride until it was near dark, and find some place to put my tent. 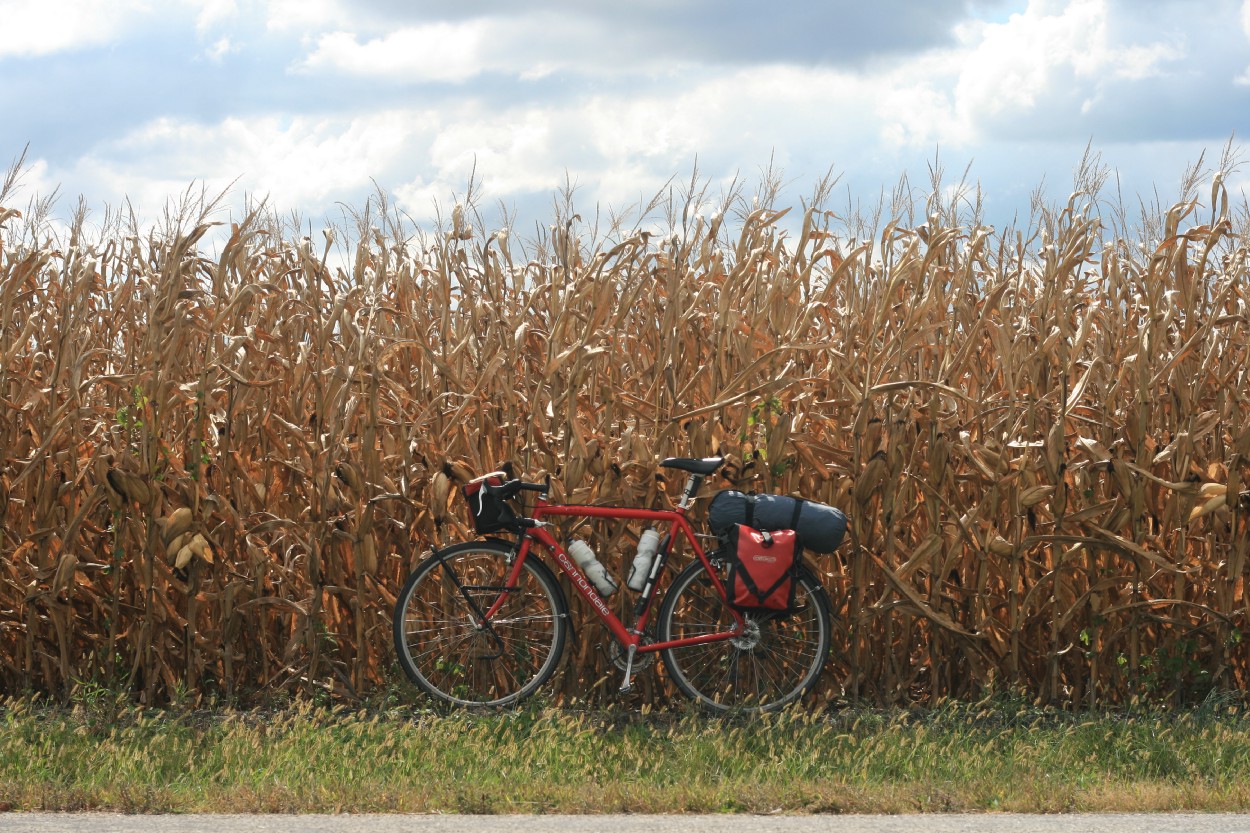 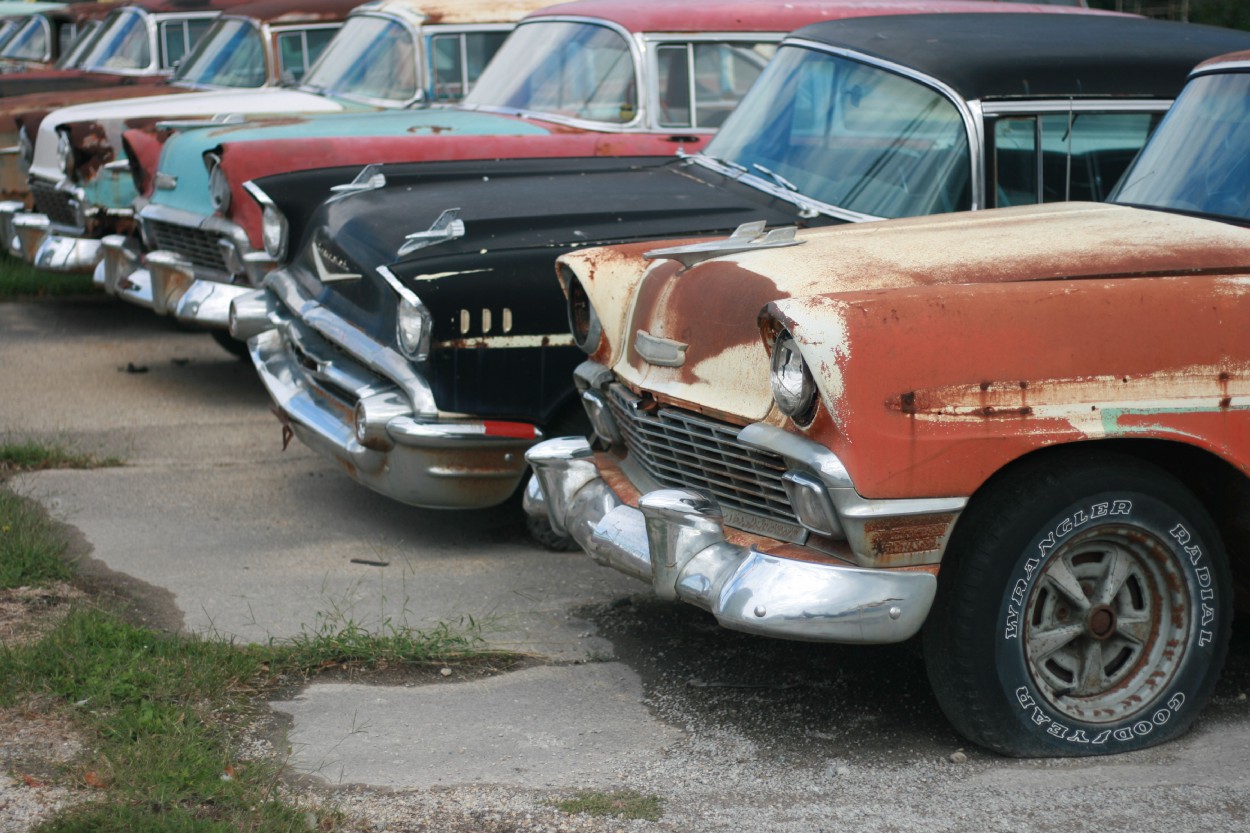 The roads continued to be flat and empty of traffic for the next few hours. The only signs of activity were the huge machines harvesting the corn in the large fields. I didn’t see many farmhouses. 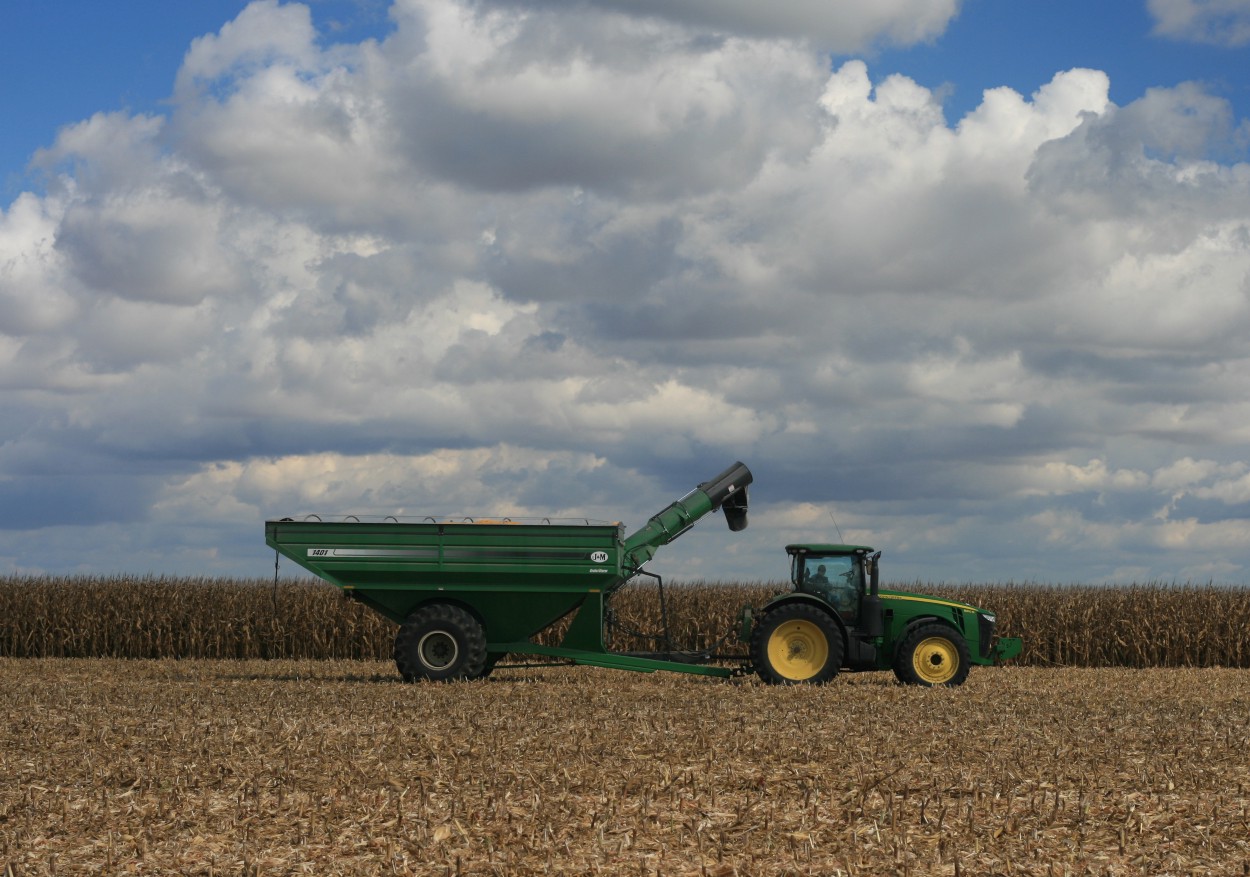 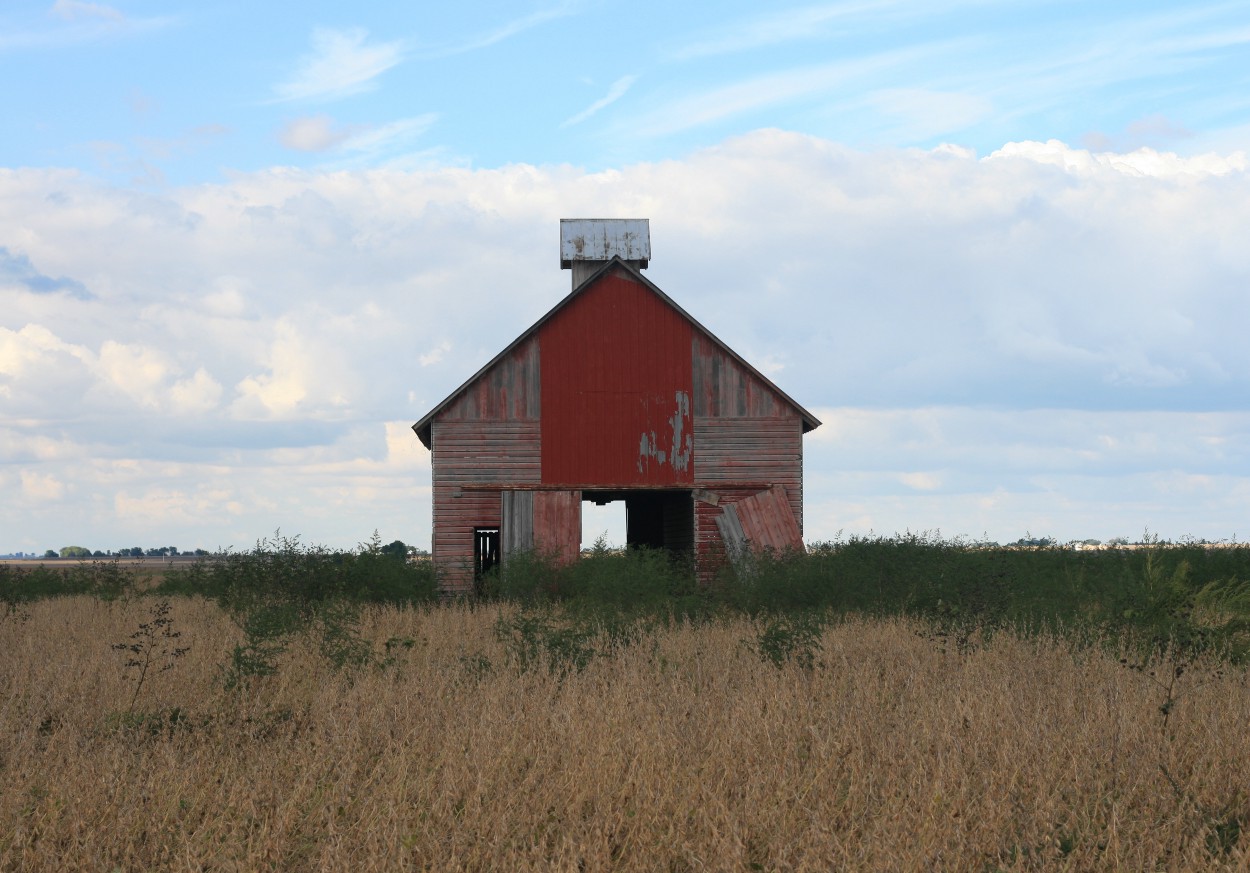 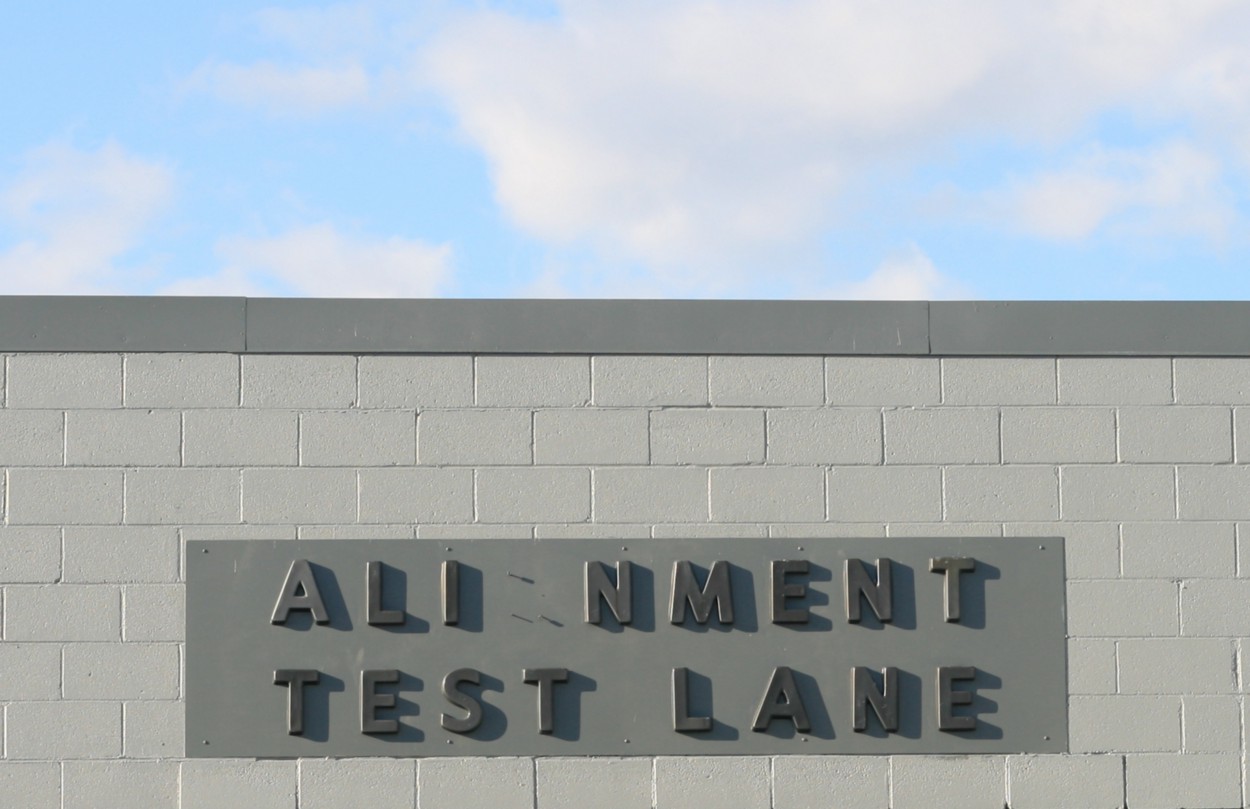 Around 5:30 I started looking for a place to “stealth” camp. After a while I found a possible site: I rode my bike into a corn field on a grassy section among the corn. The grass curved away from the road, so after a few hundred feet the tent wouldn’t be visible from the road. As I contemplated this potential camping spot, though, I could hear the corn harvesting machinery running in another field, and I realized that I didn’t know if the farmers ran these machines at night. What if the gigantic machine ran over my tent while I slept? I left the field and got back on the road.

I decided to ride a few miles off my route to Homer (population 1,193), and see if I could find a camping spot in town. Google Maps showed a town park, so I headed there, and found the city/community building where the library was still open. Angie, the friendly librarian, made some calls on my behalf, and told me that I could set up my tent behind the building. As I walked back outside, a local cop pulled up and asked me my name and date of birth. He seemed satisfied by my answers, and told me I could set up under the awning of a storage building behind the community center. As I was getting the tent out, the wind picked up and the rain poured down. Perfect timing.

After getting set up I walked back into the library, which was closing in fifteen minutes, cleaned up in the restroom, thanked Angie, and retired for the evening to my tent, where the light from the police office in the community center shown directly in my eyes, unfortunately.