I'd been tired last night, and had gone to bed without working on a route to get from Harrisburg to Cave-In-Rock, IL, on the Ohio River. From Cave-In-Rock my plan was to take the ferry and continue onto the Kentucky portion of the Trans America Trail route, the map for which I still have from my 2006 coast-to-coast trip.

How hard could it be to get to Cave-In-Rock? Pretty hard, as it turned out.

I rode out of town on a short section of the Tunnel Hill Trail, then onto some quiet streets, then past the Walmart, and then onto some tree-shaded country roads. Nice. 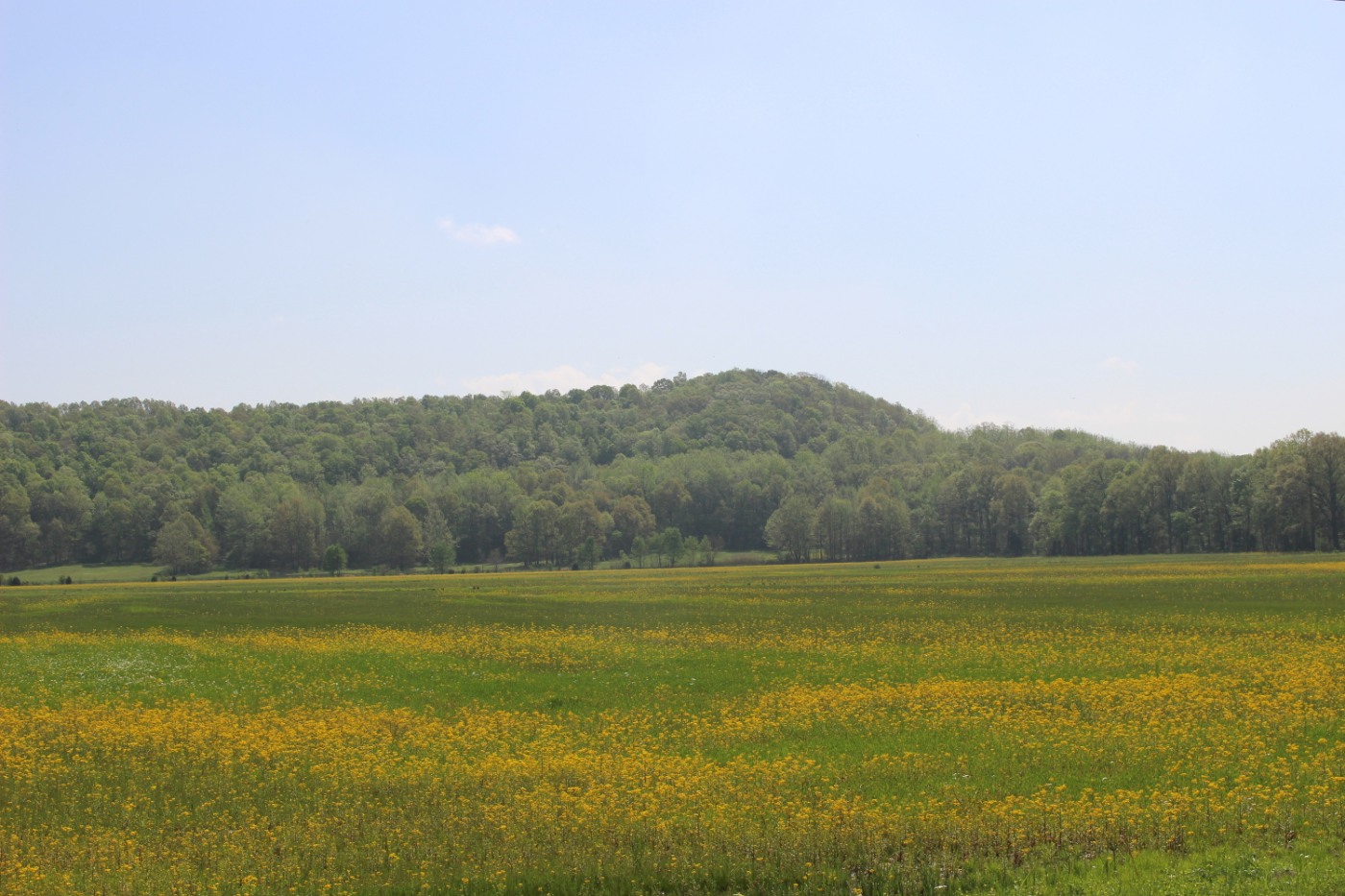 After a few miles, though, the pavement turned to gravel. A few miles after that the gravel was bigger and rougher, and my rear tire flatted. Another pinch flat.

This time it took me an HOUR AND A HALF, and three patches, to get it fixed. I'd used my only spare tube on the flat yesterday, and didn't want to risk another one on the gravel, so I started walking.

After a while I reached pavement, turned right at the next intersection, and rode a tailwind to an impossibly busy state highway. No way was I riding 20 miles or more on that. 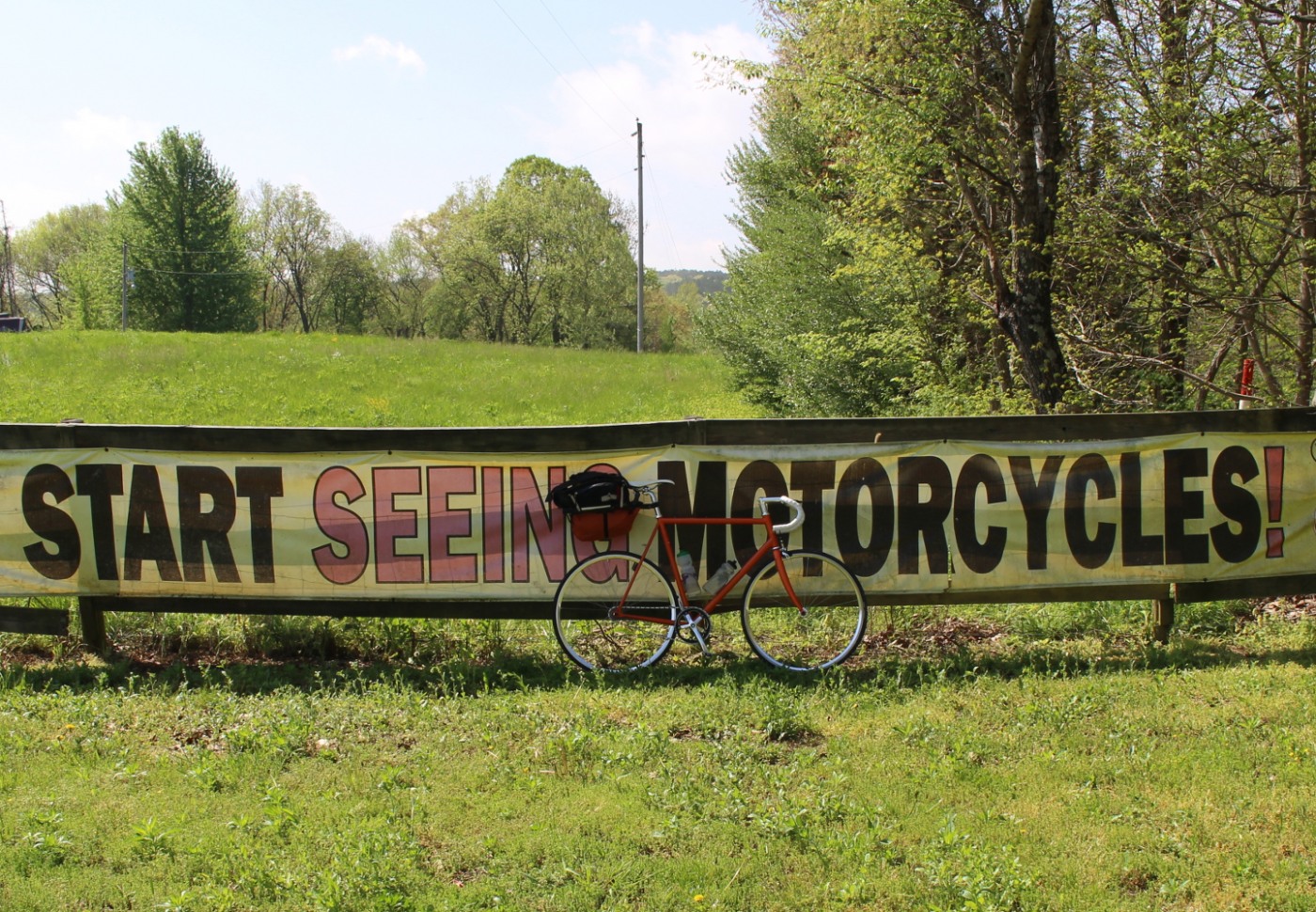 I turned back, hoping to find a less direct, less busy, but still paved route.

Whitesville Road and Horseshoe Road were both great - smooth pavement and not too hilly. Shawnee Forest Road was probably the hilliest riding I'd ever done on the single-speed. Garden of Gods Road, and Karbers Ridge Road were good, but then I had to take a series of county roads that contained intermittent gravel sections which I, paranoid about getting another flat, walked. 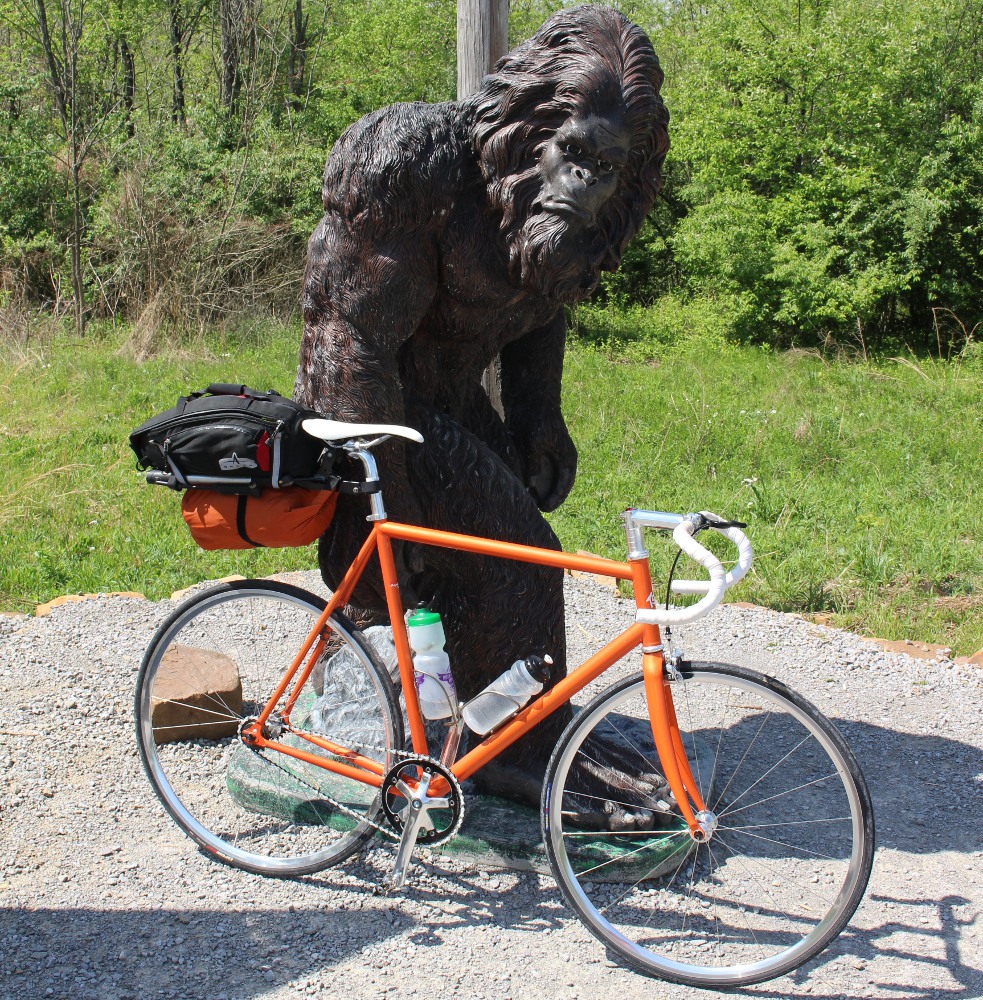 It was hot now, and I was down to a few inches of water. On one of the gravel roads I spotted a woman and her young grandson in the yard of a modest home. She was happy to give me water, even inviting me into her little house and filling the bottles with ice.

I alternated walking and riding the next couple of miles. During a section of rough, egg-sized gravel, I flagged down a mail man, who gave me directions and told me that I would reach pavement in half a mile or so.

The mail man's directions were accurate, and I was soon riding the bike instead of pushing it. I did miss one turn, climbed an unnecessary hill, fell down and bloodied my calf when I forgot to unclip, and then had a brief conversation with a local man sitting on a porch swing when I returned to the confusing intersection. "I tried to tell you that you were going the wrong way", he said between puffs on his cigarette. I did remember him shouting something, but had assumed it was either encouragement or derision. 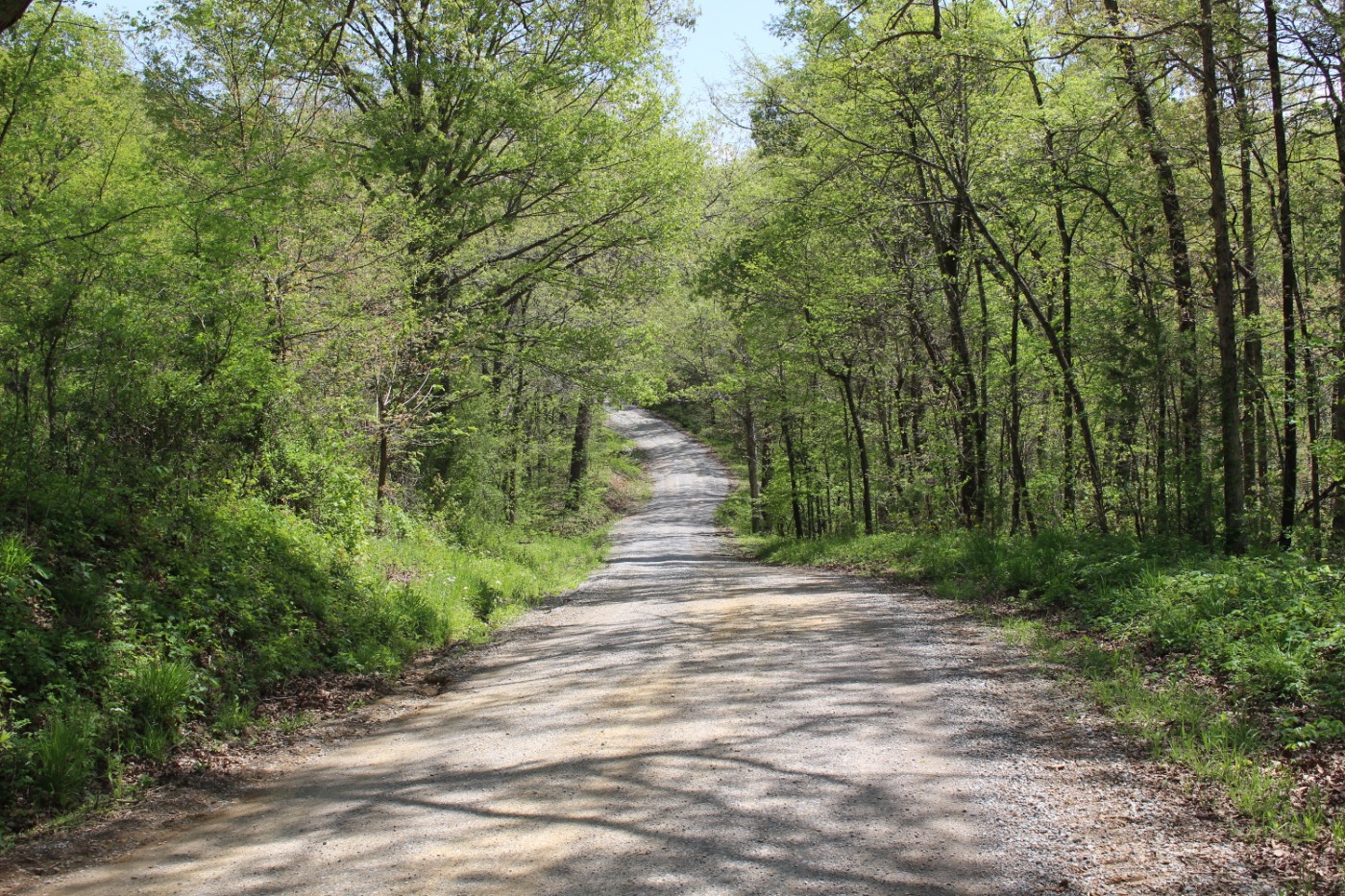 By the time I reached Cave-In-Rock it was 2:00 and I'd only done 50 miles. I was way behind schedule now, and the Utica fire department, my original destination, was clearly impossible. My revised goal was now the First Baptist Church in Sebree.

After spending a few minutes in Cave-In-Rock, unsuccessfully searching for a cold soft drink, I rode the ferry across the Ohio River to Kentucky, and the state's smooth, paved roads. The rest of the afternoon passed pleasantly enough. I met a Belgium rider doing the entire TransAmerica Trail east-to-west, and talked to him for a while. Later I dropped my chain, but that was an easy repair. 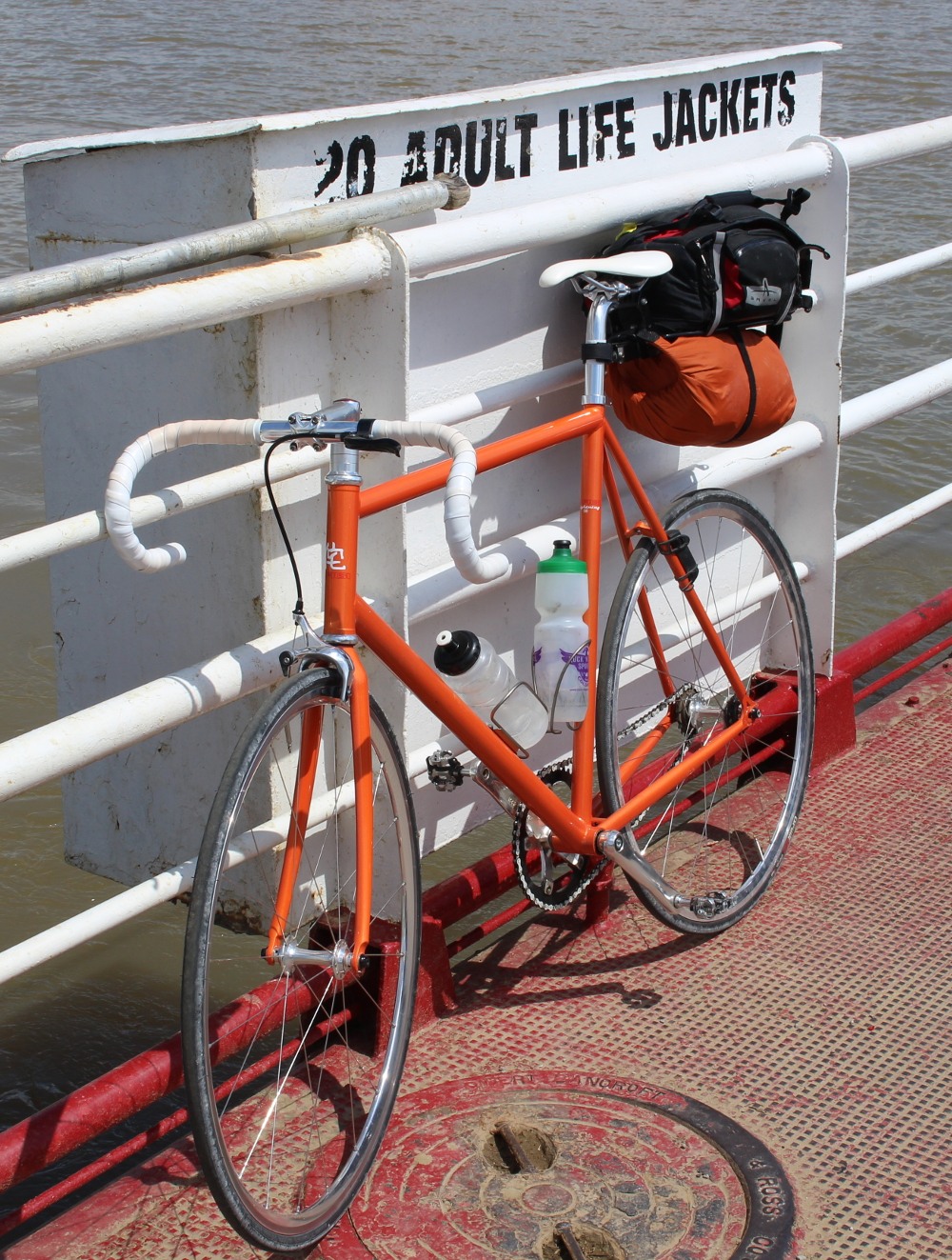 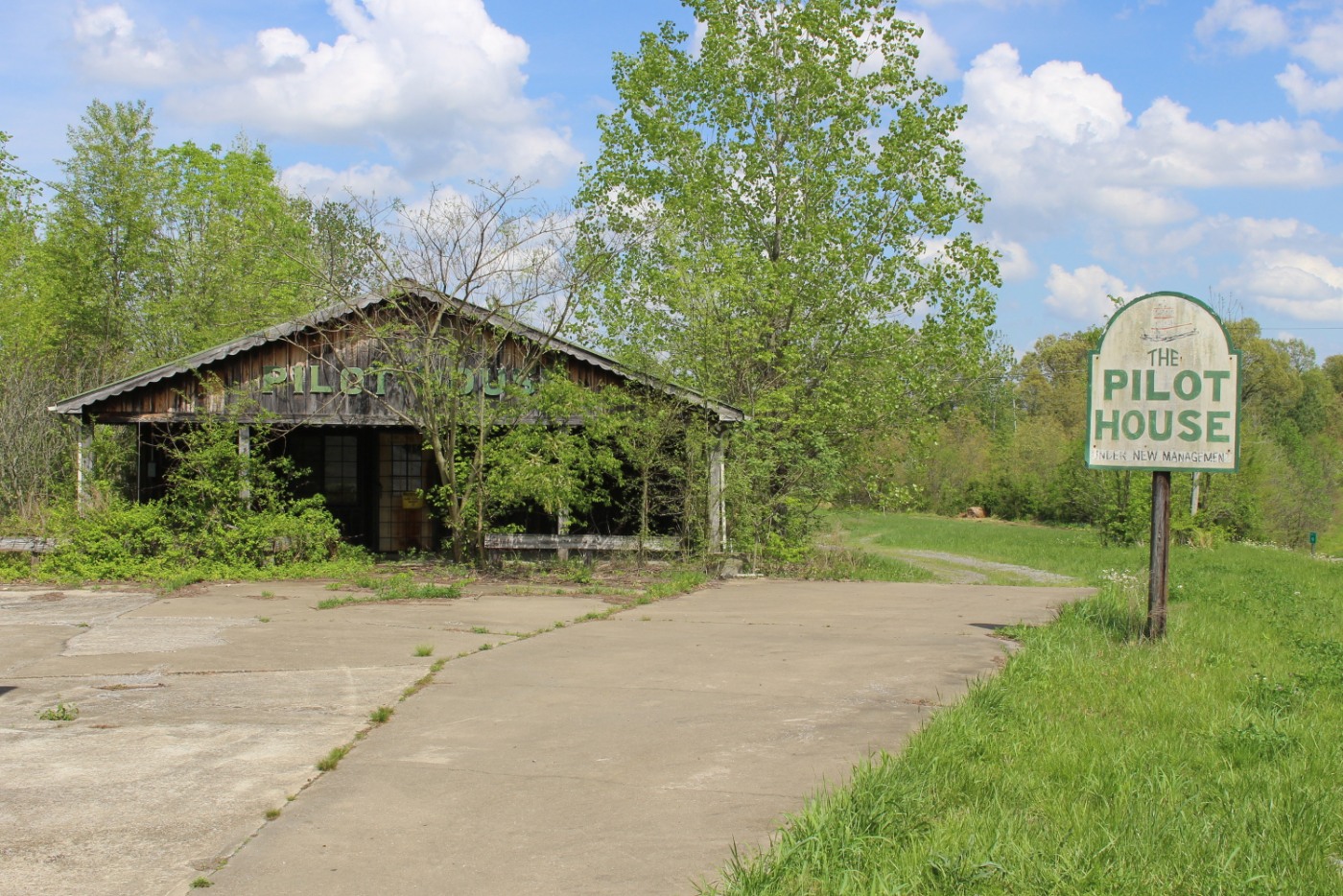 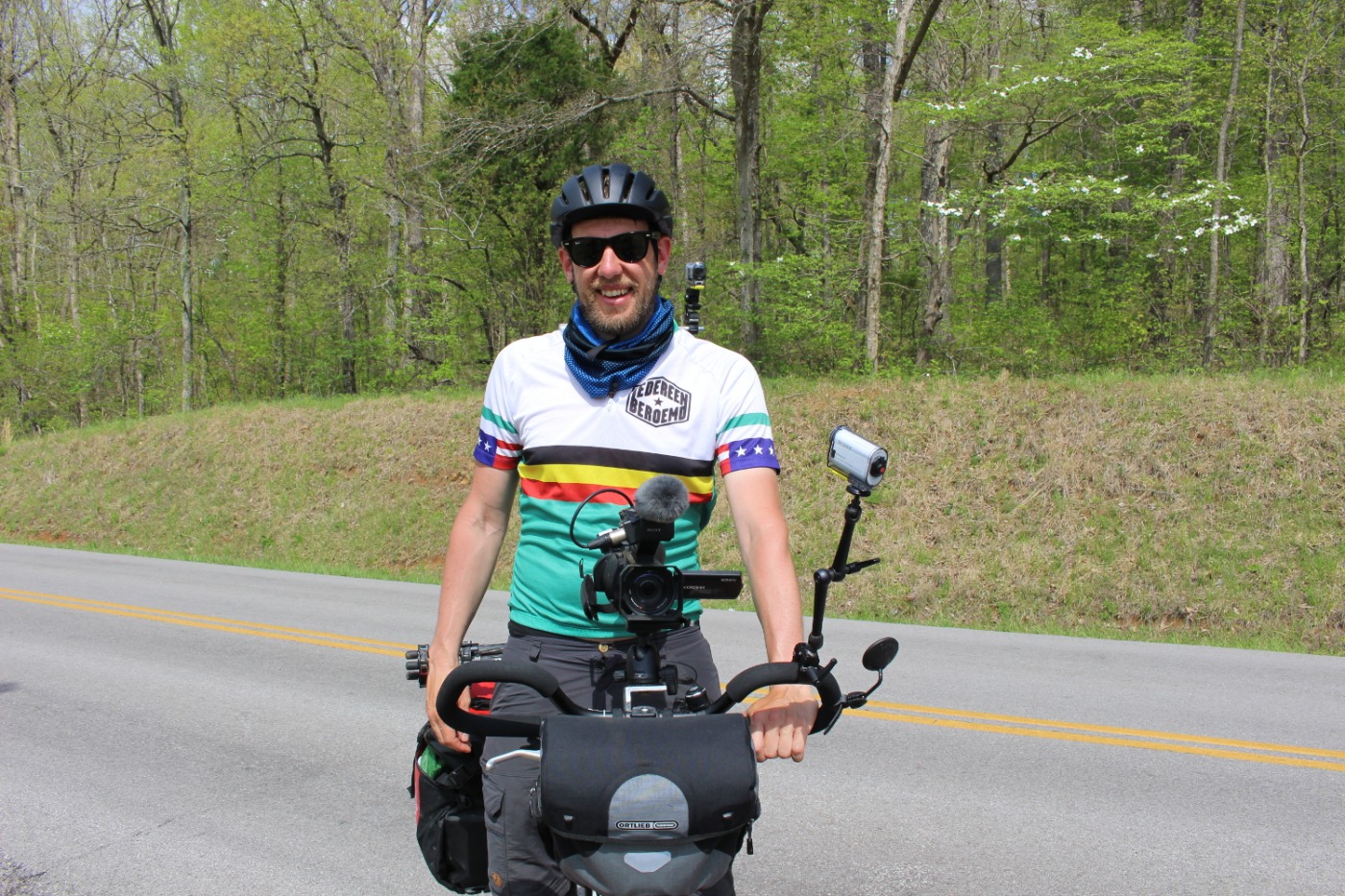 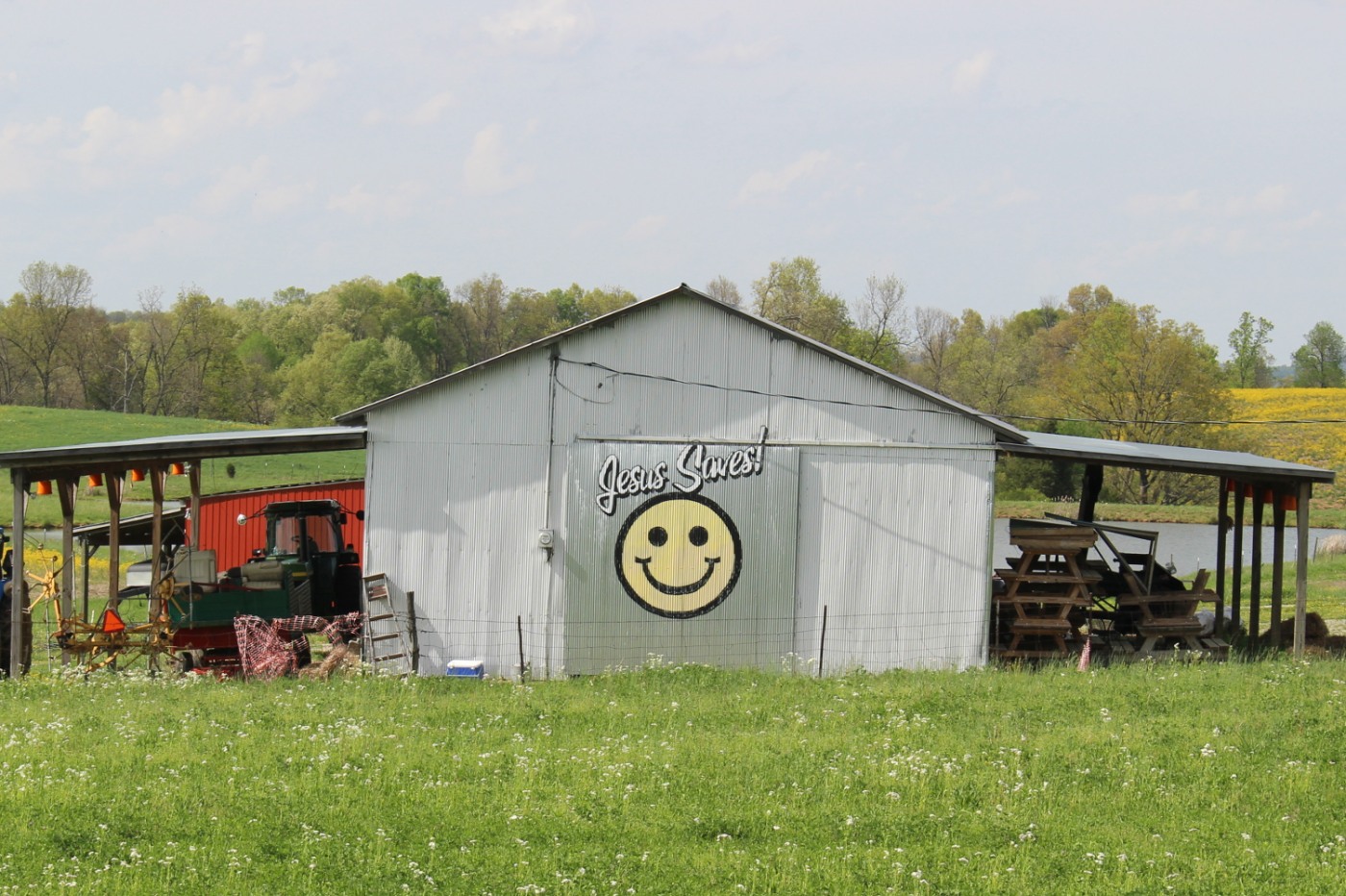 I reached Sebree (population 1,561) at dusk, checked in at the church, showered, and then encountered Violet, the retired pastor's wife, who insisted that I walk across the street for a late dinner at their house.

After dinner I walked back to the church, set up a cot in the basement, and fell into a deep sleep, despite the presence of a railroad track behind the church.