The Subaru CASA Cycling Challenge takes place each year at the Subaru of Indiana Automotive two mile oval test track in Lafayette. It allows individuals and teams to test their endurance over a 24-hour period while raising funds to support the CASAs for Kids Fund. There are three categories: Solo men, solo women, and team. For the teams the ride is like a relay, with only one member of a team on the track at a time. In 2017 there were 42 teams (each with several riders), 25 solo men, and 9 solo women.

Joy and I got to the Subaru plant and set up our tent in the infield. She would sleep there tonight, while my plan was to ride for the entire 24 hours and not sleep at all.

There were lots of riders on the track at the start of the race at 10:00 in the morning. I stayed near the back of the pack. Most of the time I ride by myself, and I was little nervous riding with so many people.

The headwind was stiff as I came around the first curve, and I immediately regretted not attaching my old, rarely used pair of clip-on aero bars to the handlebars. About 75% of the participants were riding either dedicated triathlon bikes or road bikes fitted with aero bars. I didn't see any other single-speeds. (In fact, I never saw anyone riding a single-speed during the entire event, something which surprised me; I expected to see at least a few track bikes, given that this event was on a track. Wrong kind of track, I guess.)

In the first few laps I recognized Molly Birt, last year's solo female winner, rode up beside her, and jokingly asked if I could purchase her aero bars. She seemed unamused, and I felt kind of dumb.

A few laps later, though, Stephen Strayer, last year's solo male winner (he did better by himself than all but two relay teams!) briefly slowed down and said hello. That was nice of him. He asked what my longest ride ever was, I told him 160 miles, and he assured that I'd shatter that record today. He also said that the night-time would determine the winner of the race. Stephen was prescient.

After ten laps (20 miles) I stopped briefly, rode into the infield, and looked at the electronic scoreboard with Joy. "You're in the middle of the pack," she informed me. I'd been riding as fast as I could, and was a little disappointed to be that far back in the solo male category.

After that, Joy left and went to visit her friend April, who lived in town, and I got back on the bike.

Temperatures were mild, but it was sunny, and I sweated as I maintained a decent pace, averaging over 19 mph for the first 50 laps. I took a handful of quick breaks to drink and eat snacks, and then at 100 miles I stopped and went back to our tent site. I cleaned all the salt off my face, reapplied sunblock, and chugged two bottles of coconut water from our cooler. I love coconut water, but that might have been a mistake, and I briefly thought I was going to throw up. I'd brought two other sets of bike clothes, but I decided not to change, since what I was wearing was working well so far.

I'd stopped longer than I planned. I checked the standings to find that my position had improved a little, then got back on the bike a little after 4:00.

My average speed started dropping during the second hundred miles. I attempted drafting a few times, but couldn't hold on to the lines of the fast relay team riders. I started making more frequent stops at the event's support tent, eating many cookies and an occasional banana. Joy came back before dusk, and we talked a while. My original "race plan" was to get off the bike for no more than one hour of the 24 hour event. Obviously that wasn't happening. 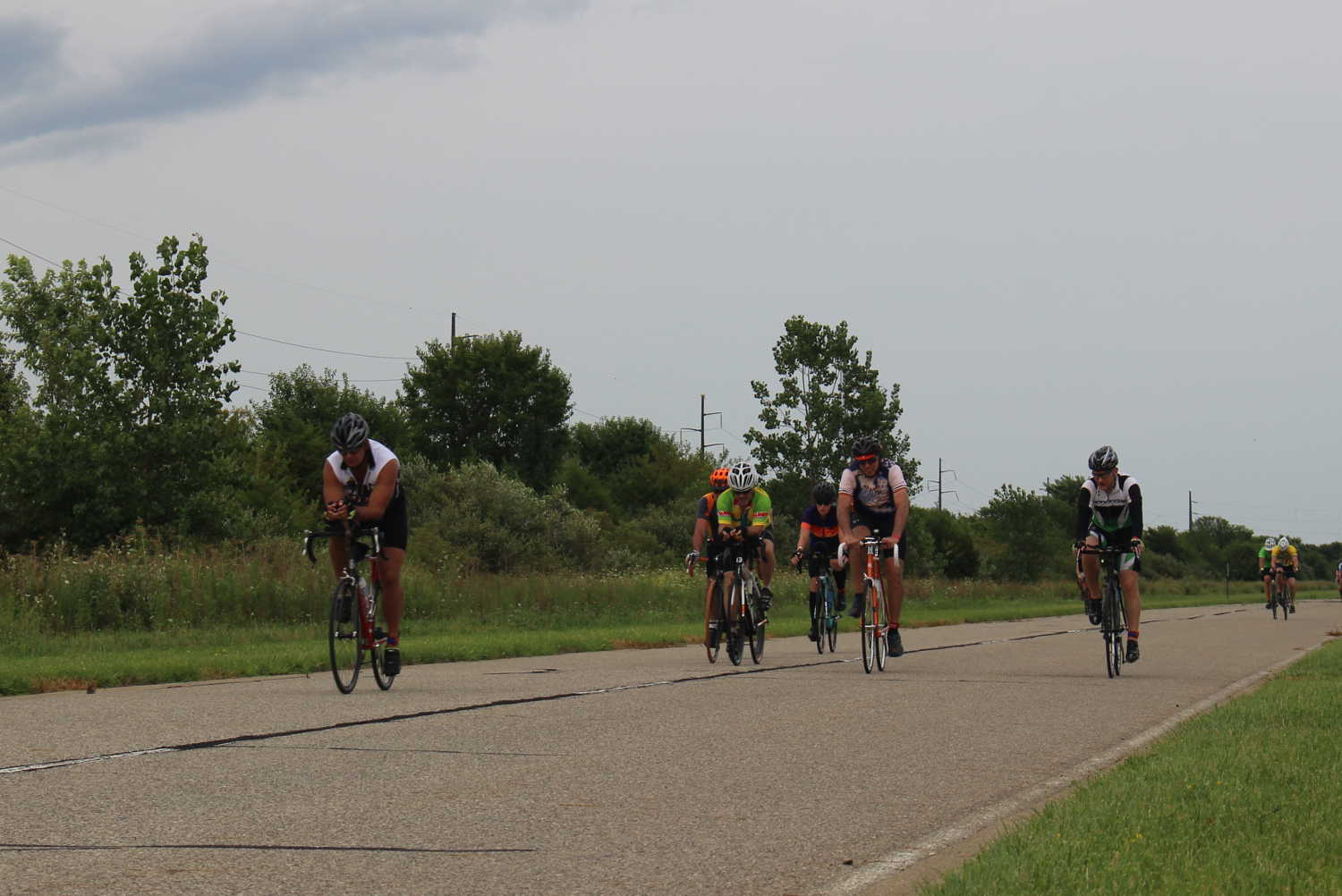 As it grew dark, I put the lights on the bike, and changed from my sunglasses to clear lenses. This would be the first time I'd done any extended riding in the dark. Bugs came out for a few laps, and coated my arms. Ugh.

There were a few lights around the track, but they weren't very bright, so everyone was required to have headlights and tail lights on their bikes. Even so, I started hugging the inside of the track, because I didn't want to be out in the middle and get hit from behind.

Our tent was in the infield close to the far-side of the track, and Joy cheered me on from there until she went to bed about 11:00.

Some time in the late evening I reached 200 miles. After 100 laps, I was intimately familiar with every bump and crack on the two miles of oval track. I now recognized almost all of the solo riders. One of them was a young guy in his 20's named Tom Bruecker, and I would occasionally ride alongside and chat with him. He'd previously done this race as part of a relay team, so it was interesting to hear his perspectives on those very different experiences.

The wind finally died down very early in the morning, it was cool (although not so cool that I needed a jacket), and the bugs weren't too bothersome. One of the event volunteers, an indefatigable older lady, cheered me on virtually every time I made it around the track. By now she knew the names of the all the solo riders who hadn't give up yet, and she called out our names as we passed where she was standing.

I was startled once when I encountered an ambulance on the dark track. One of the fast relay riders had crashed while drafting another rider. I don't like riding an inch or two behind another rider's wheel even in broad daylight, and I can't imagine trying it at night with only a weak headlight. I heard later that he broke his collarbone.

Tom Bruecker started riding faster, and I couldn't keep up - I felt that if I pushed myself any harder I'd throw up. He moved into second place behind the leader, Stephen Strayer, who, according to the scoreboard, hadn't ridden in a couple of hours. (After the race Stephen told me that once he realized he couldn't beat his own course record, he decided to sleep for a few hours.)

At 230 miles, around 3:30 in the morning, I found it difficult to continue. I started taking increasingly frequent, longer breaks at the support tent, eating bananas, sipping Diet Coke, watching the standings on the scoreboard, and trying not to vomit. I was now in fourth place, behind Stephen Strayer the leader, then Tom B., then someone named Tom Mueller. WHO WAS HE? I asked every man who came into the support tent, but none of them was the elusive Tom Mueller.

I began bargaining with myself - "Just 10 more laps, and then you can stop at the tent again." My butt was hurting, and I was afraid to see what it looked like.

On the bike, I was, perhaps unreasonably, very annoyed with the fresh relay team riders who kept zooming past me. I was especially irritated with the guy who called out "WHERE ARE YOUR GEARS!?"

About an hour before dawn I stopped for yet another break and talked to Tom B.'s wife, who had woken up. She was cheering him on from the sidelines. But she also said she was going to suggest to him that he stop once he got to 300 miles, which earlier he had told me was his personal goal.

A couple of times I visited the men's restroom, which was was horrific, with pools of pee everywhere. Fortunately I was so dehydrated that I didn't need to stop there very often, or for very long.

When dawn broke I felt a little burst of energy. Joy was up now. Tom B., who had been several laps ahead of me, appeared to have stopped riding at 300 miles... was he asleep? I was still in fourth place, but was gaining on him. I told Joy I was going to make a final push to the end, and go for third place. I was five or six laps behind 2nd place rider Tom Mueller, the closest I'd gotten to him. 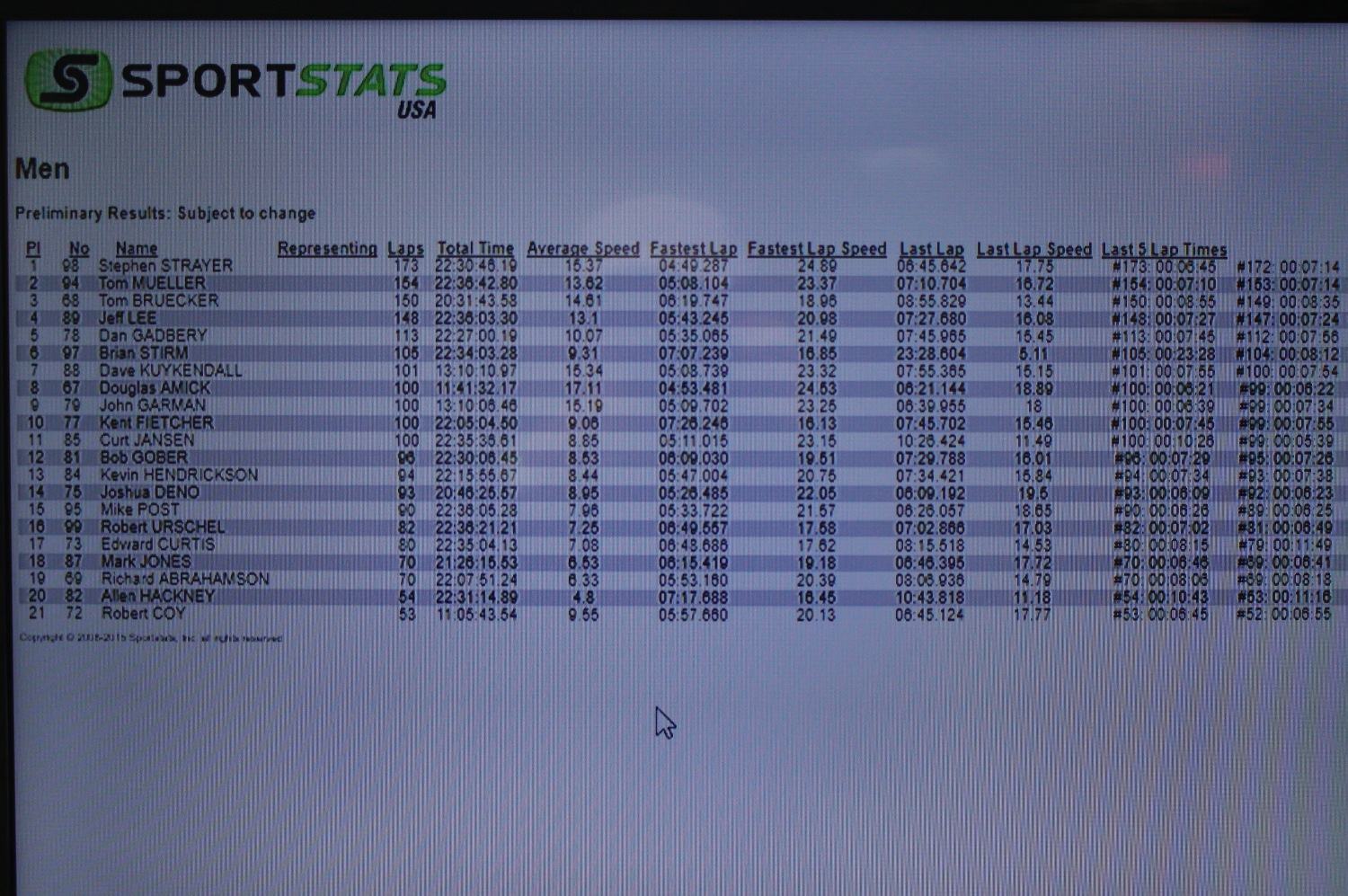 The sun was up when I finally met Tom Mueller, riding on the track. I rode with him for seven laps, which went much more quickly, now that the sun was out and I had someone to talk to while riding.

Back at the tent for a break I looked at the standings, and Tom Bruecker walked up, not in bike clothes. He'd quit the race at 300 miles, and my third place result was secure.

Just before 10:00 in the morning, 24 hours after the start of the race, I made my 155th lap around the two mile oval track. I was very tired of riding my bike now.

There was a brief awards ceremony, where I accepted my third-place solo male plaque, then we (well, Joy) packed everything up, and we headed to our friend April's house where I tried not to fall asleep while I took a shower. 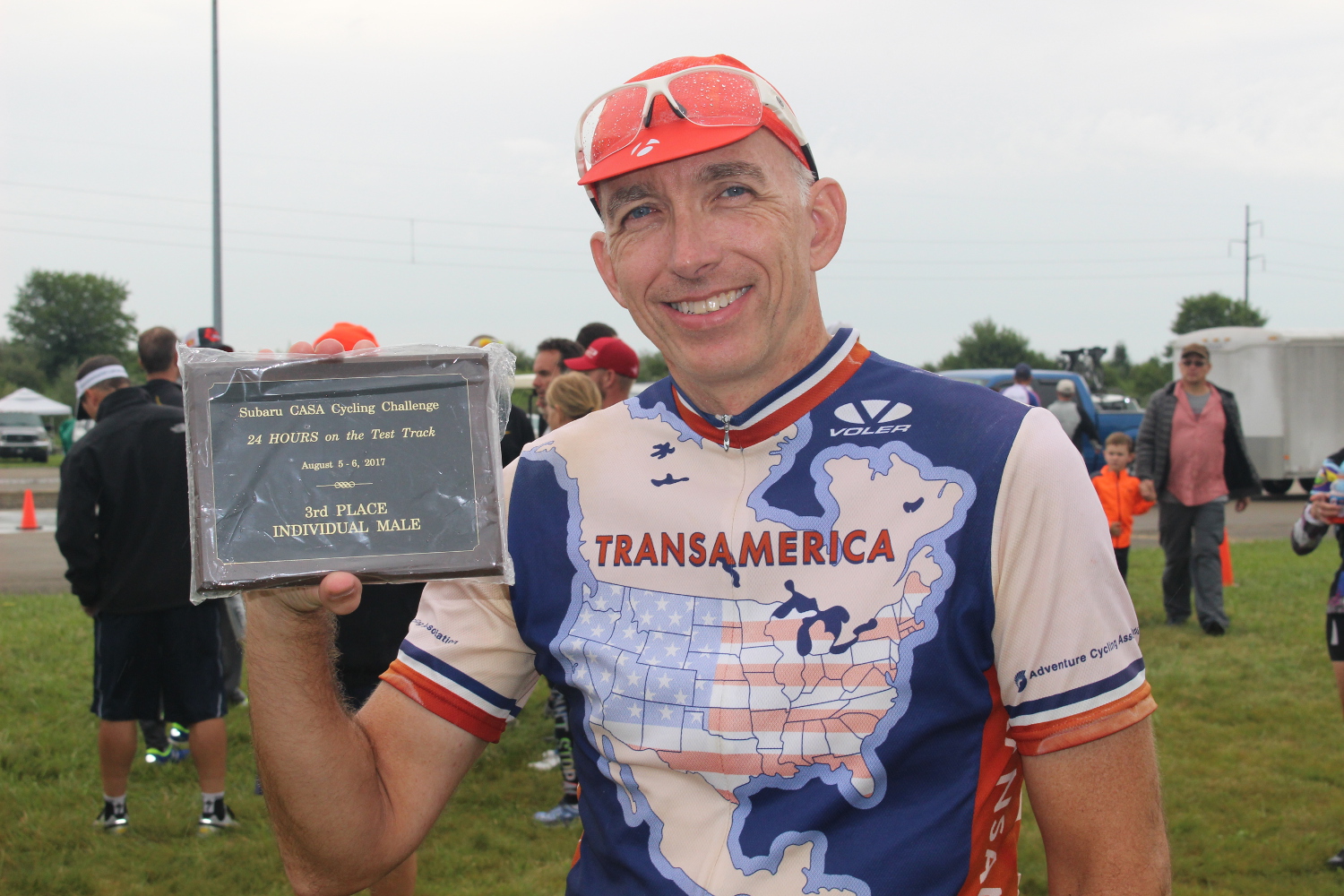 Everything hurt, and after spending 20 of the last 24 hours perched on a small, hard saddle, my butt especially was... not so good.

Still, I had a great time doing this. I'll never be very fast on the bike, but I feel good that I never quit, even in the middle of the night when it was extremely difficult to force myself to make yet another lap around the track.